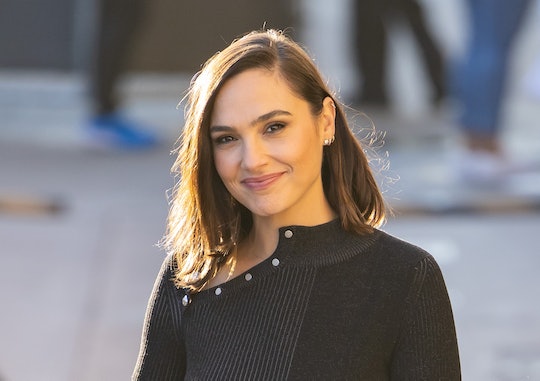 Gal Gadot Says She Loves Giving Birth So Much, She'd Do It "Once A Week" If She Could

“Just the moment you feel like you're creating life, it's incredible,” the Red Notice star said.

In Wonder Woman, Gal Gadot played a superhero capable of carrying out physical feats mortals can only dream of. Offscreen, Gadot is, of course, just as human as the rest of us. But it seems as if the mother of three may inherently possess a bit of Wonder Woman’s superhuman strength and stamina. I mean, how else can you explain Gadot’s professed love of childbirth?

“I love giving birth,” Gadot recently said in an interview for InStyle’s Badass Women issue. “I would do it once a week if I could. It's so magical.”

While childbirth is different for every person who goes through it, there’s no denying it’s generally a painful experience. In an early study on labor pain, 91% of participants reported having “high levels of pain” during labor. What’s more, 41% of those participants described their pain as the “worst imaginable pain.”

Still, for Gadot, who admitted to having had an epidural with each of her three daughters “so it’s not so painful,” the act of bringing a new life into the world trumps any pain she experienced. “Just the moment you feel like you're creating life, it's incredible,” she told InStyle.

But Gadot’s love of giving birth doesn’t appear to extend to being pregnant. In fact, the Red Notice star told InStyle she felt out of her element during all three of her pregnancies. “The pregnancies are hard for me — I feel sick and have migraines,” she said. “I'm not in my element.”

Gadot shares 10-year-old Alma, 4-year-old Maya, and 6-month-old Daniella with her husband Jaron Varsano and counts balancing motherhood with her career as the most badass thing she’s ever done. “When you're on set, you're like a kite,” Gadot, who was actually five months pregnant with Maya while filming scenes for Wonder Woman, told InStyle. “You can fly so high and try to catch the air. Then you go back home to do your main shift as being a mother. It's not about me, it's, ‘OK, now I need to bathe Maya, feed Alma, put Daniella to bed.’ That is the badass thing I do: the juggling between my family life and my acting career.”

And as Gadot herself has admitted, that balancing act isn’t always easy. In June 2017, she posted a barefaced selfie on Instagram, noting it was taken after a “sleepless night” with a “colic 3 months old baby” and “an early wake up by my 5-year-old.”

So while many won’t relate to Gadot’s love of giving birth, they likely will relate to her candor about the very real challenges of parenting three kids. “Yeah, three kids. No joke,” she told InStyle. “God bless them, but it's so much work.”

More Like This
Nick Cannon Welcomes Baby #8, His First With Bri Tiesi, In Beautiful Home Birth
Yellowstone's Kelly Reilly Has A Much More "Content" Married Life Than Beth Dutton
20 Adorable Photos That Prove Prince William & Princess Charlotte Are Thick As Thieves
The Bear’s Jeremy Allen White Is A Private Breakfast Chef For His Daughters