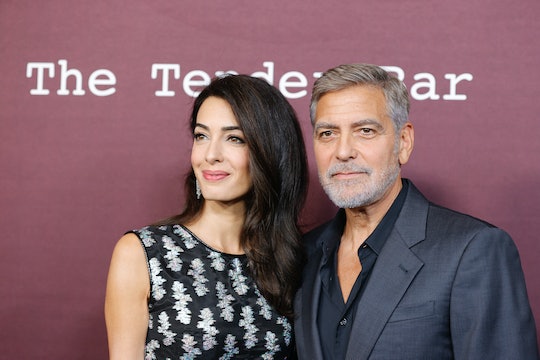 “That's a flaw in our logic, right there.”

George and Amal Clooney's 4-year-old twins, Ella and Alexander, are not even in first grade yet and have already mastered one of the romance languages in the world. While attending the premiere of The Tender Bar on Sunday, the couple shared with E! News' Daily Pop, that their kids have learned to speak Italian fluently.

“They speak fluent Italian, but Amal and I do not,” Clooney shared, adding that they’ve been homeschooling their twins since the pandemic started. “That's a flaw in our logic, right there.”

And when they’re not speaking foreign languages, it sounds like they’re learning how to play pranks, with their dad as their teacher. “He’s mainly teaching pranks for the time being,” Amal Clooney told Daily Pop. “But we’ll see if it develops.” The human rights attorney added that her husband was a great teacher, to which the Golden Globe actor replied, “Well, I think those can really pay off over time.”

Earlier this year, the Midnight Sky actor jokingly admitted to TODAY show's Hoda Kotb his true job as a parent is to teach his kids the art of pranking. “My whole job really is to teach them terrible things,” Clooney said. “And I really do enjoy teaching my children to do things that shock their mother.”

So in other words, the Clooney household has apparently been full of Italian and pranks during quarantine. Ammazza!

Aside from the pranks, Clooney has shared that while Alexander is a prankster at heart like him, his daughter is a bit more like her mother. “My daughter, it feels like she might be more leaning towards my wife. She puts everything in order, she really is very smart,” Clooney said about Ella during a December 2020 interview with ET Canada.

While the Clooneys did not say how exactly their twins are learning Italian, the skill could be attributed to their surroundings. The couple does own an 18th-century villa in Lake Como, Italy, which they use as their vacation home. However they picked up on the language, the Ocean’s Eleven actor admitted that their kids basically communicate with a secret language.

“We did a really dumb thing, which is, they speak fluent Italian. I mean fluent Italian at three,” Clooney shared on the Jimmy Kimmel Show last December. “But I don't speak Italian, my wife doesn't speak Italian, so we've armed them with a language... I'll say, 'Go back in and clean your room,' and they'll be like, 'Eh, papa stranzo.’ I'm from Kentucky, English is a second language to me.”