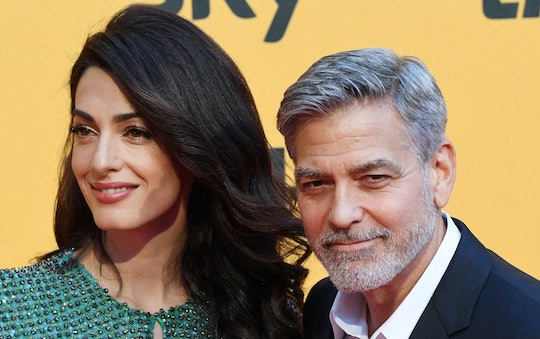 Knowledge can be a dangerous weapon for toddlers...

In a recent interview on Live! With Jimmy Kimmel, father of two George Clooney admitted his twins use Italian as a "secret language" against their parents. Thus begins for the actor and his wife, human rights lawyer Amal Clooney, the classic struggle every parent must deal with at some point: wanting your kids to exceed expectations and living in fear that they will outsmart you earlier than you might have liked.

The Ocean's 11 actor and his wife are raising their 3-year-old twins Alexander and Ella at their home in Lake Como, Italy, although during the pandemic the family has been staying in Los Angeles. But here's the thing; you can take the kids out of Italy but you can't take Italy out of the kids. As Clooney told Kimmel, "We did a really dumb thing, which is, they speak fluent Italian. I mean fluent Italian at 3. But I don't speak Italian, my wife doesn't speak Italian, so we've armed them with a language."

It seems the clever toddlers will speak to each other in Italian when they don't want their parents to understand. Clooney gave an example, "I'll say, 'Go back in and clean your room,' and they'll be like, 'Eh, papa stronzo.' I'm from Kentucky, English is a second language to me."

Also, if his kids are saying stronzo, he should know they're basically calling him an a**hole in Italian. Hurtful.

To be fair to the Clooney twins, their father has owned his Lake Como mansion since 2002, according to Explore Lake Como, so it's not like he hasn't had a chance to learn the language. On the flip side of that coin, learning a second language is considerably easier for children than it is for adults. So they had a leg up on their parents.

Clooney's kids might have surpassed him in the language department, but he was able to teach them a thing or two about one of his own specialties. Pranking. He told People that he has trained his toddlers to pull off a particularly gross joke on visitors, "I did work with them on putting Nutella in a diaper and then eating it [prank]. Whenever a stranger is around, they’ll come in holding it, like, ‘Papa, it’s a dirty nappy!’ and I go, ‘Okay, I’ll take care of it,’ and then they eat the Nutella out of the nappy.”

So Alexander and Ella are out there speaking Italian, raising the barre of discourse to a whole new level. And their dad brings it right on down with his Nutella in the diaper gag. Balance.