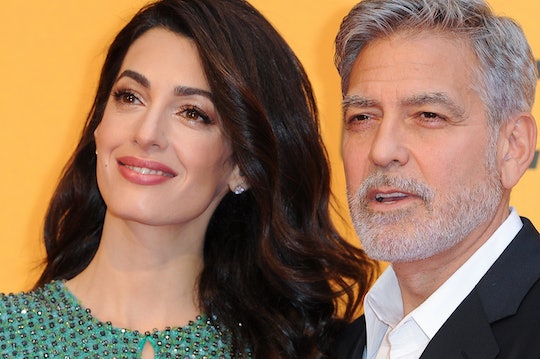 George Clooney Recalls Finding Out His Wife Was Pregnant With Twins

Finding out the baby you're expecting not one, but two babies can be overwhelming for even the most prepared parent-to-be. Even one of Hollywood's biggest stars. So it's completely understandable — and all too relatable — that George Clooney's twins initially left him speechless and maybe a tad bit nervous. The 59-year-old actor and director recently admitted to having been caught off guard by news that wife Amal was pregnant with twins.

In an interview with CBS Sunday Morning, Clooney said he and Amal decided rather spontaneously to have children. "We never talked about having kids," The Midnight Sky star and director, who married human rights lawyer Amal in 2014, said. "Then one day we just said, 'What do you think?'"

But while Clooney had apparently decided he was "up" for having a kid, he was in for one heck of a surprise as Amal's pregnancy progressed. "We go to the doctor and, you know, you do the ultrasound and like, 'Hey, you got a baby boy,'" Clooney told CBS Sunday Morning. "I said, 'Baby boy, fantastic!' Then they go, 'And you got another one there.' And I was like… I was up for one, you know? 'Cause, again, I'm old."

Clooney was 56 years old when his twins, Alexander and Ella, were born in 2017.

"All of a sudden it's, like, two?" Clooney continued. "You know, it's hard to get me to not talk. And I just stood there for like 10 minutes, just staring at this piece of paper going… 'two'… silently. But I'm so glad they have each other, you know?"

Although the actor went on to jokingly refer to his 3-year-old twins as "knuckleheads," he stressed that they and Amal have left him feeling very fulfilled in life. "It is very fulfilling," he said. "And it's something I didn't see coming."

Since the start of the ongoing coronavirus pandemic, Clooney has been juggling child care and household chores while trying to work from home. And like many of the working parents who find themselves in similar situations, Clooney has had work calls interrupted by his kids. Most recently, Alexander wandered in on his video interview with GQ, giving Clooney the opportunity to brag about his kids' foreign language skills.

Staying at home and managing chores has also given the actor a new appreciation for his own mother. "It's been a while since I did, you know, 15 loads of laundry in a day and mopped floors and, you know, all these doors over here I stained!" the actor told CBS while gesturing to his garage doors. "You know, I always say I felt like my mother in 1964, 'cause she had two kids and no help. And I don't know how she did it now. I have more sympathy for her now than ever."