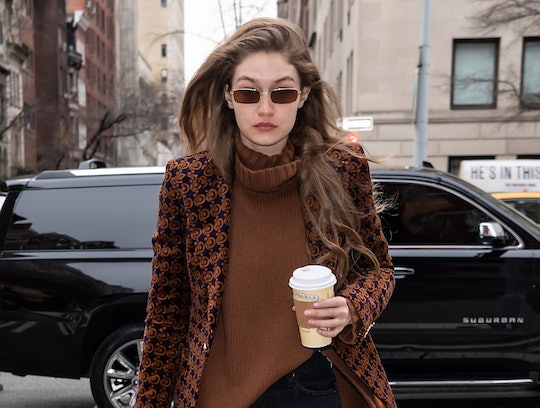 You can't beat that newborn scent...

Researchers have looked into why new moms just can't get enough of that newborn scent. The science is there, it's a thing, and it seems Gigi Hadid would agree. In a new photo with her daughter, Hadid said her little girl "burps sunshine" because, yes, that's what newborns do.

"She burps sunshine," the model and the first time mom wrote on a selfie with her 2-month-old daughter laying on her chest shared on her Instagram Story on Sunday, followed by winking and smiling emojis. Sure, with that little wink, she was probably joking, but most moms would probably agree that everything their newborns do is the most precious thing ever. Even a little gas.

While her little girl's face is hidden in the photo, but her adorable yellow socks are proudly displayed, this photo is kind of rare for the new mom. This is only the third time Hadid has posted a photo of her daughter with boyfriend, Zayn Malik, on social media since she gave birth.

Though she's shared a glimpse here and there, Hadid has been adamant about maintaining her family's privacy throughout her pregnancy and during these first few weeks of her daughter's life. For instance, she hasn't shared a photo of her daughter's face yet on social media or revealed her name. Throughout her pregnancy, Hadid stressed that she wanted to experience this very special time with her family and loved ones and said she will share more once she is ready to do so.

During an Instagram Live in July, Hadid opened up about the secrecy surrounding her pregnancy. "Obviously a lot of people are confused why I'm not sharing more, but like, I'm pregnant during a pandemic," she said at the time. "Obviously, my pregnancy is not the most important thing going on in the world. That's a reason I felt that it's not really something that I need to share a part from with my family and friends."

But now that her little girl is here, the world is also getting a sweet glimpse at her life as a mom. Belches and all.