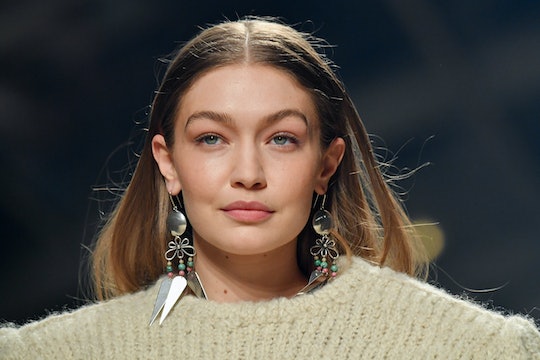 Roughly two months after confirming that she and singer Zayn Malik have a baby on the way, Gigi Hadid showed her pregnancy bump for the first time with her fans. On Wednesday, the expectant mom-to-be did an Instagram Live where she gave her fans a peek at her growing bump and also shared some insight into why she's been quiet about this time in her life on social media.

Hadid and Malik, are currently expecting their first child together, and she is reportedly due in September, according to Harper's Bazaar. And although she's been active on social media, the 25-year-old model has remained relatively quiet about her pregnancy. Hadid has previously called out British Vogue for saying she was trying to "disguise" her bump, tweeting that that she is "proudly experiencing and sharing this time with my family and loved ones." And during her Instagram Live, Hadid elaborated on this a bit further.

"Obviously a lot of people are confused why I'm not sharing more, but like, I'm pregnant through a pandemic," she explained. "Obviously, my pregnancy is not the most important thing going on in the world. That's a reason I felt that it's not really something that I need to share a part from with my family and friends."

Although she isn't quite ready to share more bump updates with the world, she did move to the side to show people a brief glimpse at the profile of her pregnant tummy for the first time. "There's my belly y'all," she said. "It's there."

Hadid cited the deaths caused by the coronavirus pandemic and current conversations about race amid the Black Lives Matter protests as reasons to why she has been more silent about her pregnancy and more vocal about important issues like racism and police brutality. "I do think our presence on social media should be used for that," she said.

But Hadid did share that she has been taking lots of pictures of her bump and documenting her pregnancy along the way — she's just "not in a rush" to share it with the world. "I just want to experience it," Hadid said. "And I write in my journal a lot and I just don't want to worry about waking up every day during my pregnancy and worry about having to look cute or post something... You'll see it when you see it."