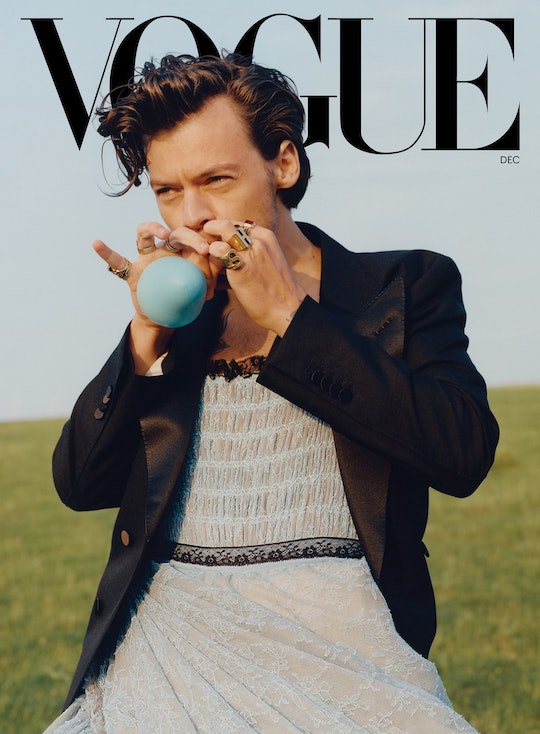 "I think maybe I had something to do with it."

After receiving both praise and criticism for his glamorous outfit, Harry Styles' mom responded to his Vogue cover with the sweetest story about the singer as a child. According to Styles' mom, he's always had a penchant for trying on "fancy dress" clothes and she has gleefully encouraged him every step of the way.

Styles made history as the first man in 127 years of publication to grace the cover of Vogue for its December issue, and he did so wearing a floor-length Gucci ball gown paired with a tuxedo jacket. He wore several other high fashion looks for the photo shoot including a kilt and a crinoline skirt, and opened up about wearing clothing traditionally considered feminine in his interview with the magazine. "When you take away 'There's clothes for men and there's clothes for women', once you remove any barriers, obviously you open up the arena in which you can play," Styles told Vogue.

It seems he comes by his sense of play in fashion naturally, as his mother Anne Twist said in a recent interview with British talk show host Lorraine Kelly. During an appearance on Lorraine, Twist shared a story about how she often played "fancy dress" with her two kids, Harry and his sister Gemma, when they were little, and her son was the one who loved it. "I was always a big fan of doing fancy dress with them when they were smaller, which Gemma hated but Harry always embraced," she said. "But you know, who doesn't love playing dress-up?"

Twist went on to proudly say she believed that she had "something to do with" Styles' love of glamorous clothing, and when Kelly noted that people should be able to wear whatever they like, Twist firmly agreed by saying "Absolutely."

Harry Styles' mom shared the cutest story about how he always loved to play "fancy dress."

While some right-wing critics were less than impressed by Styles' decision to wear a dress — like conservative writer Candace Owens who tweeted a picture of the cover with the words "Bring back manly men" — the backlash does not seem to have bothered anyone in Styles' family. His mother or his sister.

Styles' sister Gemma confirmed that her mother really went for it with playing dress up with her kids in an interview with Vogue, even if she didn't always like it. As she told the magazine, "My mum loved to dress us up...I always hated it, and Harry was always quite into it. She did some really elaborate papier-mâché outfits: She made a giant mug and then painted an atlas on it, and that was Harry being 'The World Cup.' Harry also had a little dalmatian-dog outfit, a hand-me-down from our closest family friends. He would just spend an inordinate amount of time wearing that outfit. But then Mum dressed me up as Cruella de Vil. She was always looking for any opportunity!"

And now that her son is grown, he is taking full opportunity as well. On the history-making magazine covers, no less.