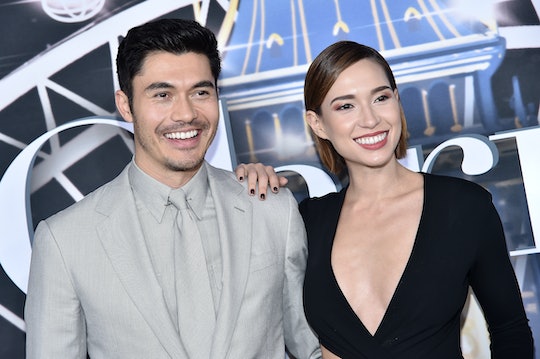 His baby carrier is basically a small yurt.

Seven months ago, Henry Golding became a dad for the first time. He and his wife Liv Lo welcomed a baby girl they named Lyla, and obviously life changed forever for the couple. For instance, now the Crazy Rich Asians actor has a hiking partner in his daughter. So long as he’s willing to do all of the heavy lifting and carrying and actual work while she just enjoys the scenery. Not a terrible set-up for either one of them.

Golding first shared that he was a dad on Instagram back in April with a gorgeous black-and-white photo of his new family of three and a caption praising his wife of five years. “This woman right here. Beyond anything I could have ever imagined. Your strength brought us our greatest joy. Thank you, I love you,” he wrote. Since then, little Lyla has become the true north star of her dad’s social media feed. Especially when it comes to getting outside and enjoying nature together with Golding carrying his baby girl in various baby carriers.

His most recent hike with Lyla featured arguably the most impressive carrier yet. It basically looked like he was carrying a studio apartment in Manhattan on his back, that’s the kind of luxury Lyla is dealing with here.

Henry Golding carries baby Lyla on his back.

Golding captioned the photo “Giddy up” with the hashtags #girldad #slave. To be fair, that carrier looks like it probably has some heft to it. Between the canopy and the little seat and all the extra compartments, not to mention an adorable smiling baby, it would be no easy feat carrying such gear. Much more substantial than the front-facing carrier both he and his wife have carried Lyla around in before.

While the Snake Eyes star didn’t share the brand behind the carrier, it looks awfully similar to the Osprey Poco LT Child Carrier from Pottery Barn Kids. This carrier sells for $260 and features a sunshade with UV protection, a rain cover, extra storage, and something called a “deluxe child cockpit” which sounds impressive. It also comes in four colors.

This proud dad has been hiking and traveling and living his best life with his daughter for months, and he told People in July that “every morning it's like she comes up with something new, something exciting. She makes this look at you or she smiles. Every day is a joy. It's crazy. You do feel the sense of overprotectiveness already. I'm sure it gets worse!”

Perhaps that overprotectiveness is the reason why he carries his daughter in what looks like a portable yurt. They both look pretty happy about it, so why not?