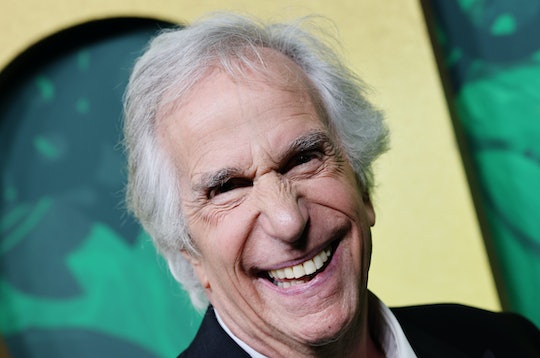 Henry Winkler might not have won an Emmy on Monday night for his performance in Barry, but he won something much better. Knowledge that he’s definitely still got it where the internet is concerned. When Winkler stopped for an interview on the red carpet on Emmy night, he found out he was a DILF. And his reaction just made him even more DILF-worthy, to be honest.

The legendary actor was asked by Mario Lopez and Kit Hoover for Access Hollywood to read some thirst tweets on camera, and he gamely jumped right on in. The first read, “Henry Winkler underrated dilf.” Winkler looked vaguely confused, keeping in mind that he is 76 years old and might better be referred to as a GILF, and asked, “Wait a minute, is that like an elf?” Lopez generously helped him out. “It’s a compliment, sir. It means ‘Dad I’d like to... and then fill in the blank with that one.”

Winkler gasped and said, “No!” and stood in shock for a moment. Before pocketing the message and saying, “I’m going to keep this one. I’m not going to show that to anyone.”

Too late, Winkler. We’ve all seen it now.

Winkler’s new title as “underrated DILF” probably only came as a surprise to the man himself. He has, after all, been charming the internet with his sincere, lovely social media content for some time now. Like a recent video he shared on TikTok featuring the man himself dancing to “When I Grow Up” by Pussycat Dolls with his three of his grandchildren. See what I mean? He’s a Grandpa I’d Like To...

In any event, Winkler’s DILF status is neither here nor there. He has been happily married to activist Stacey Weitzman since 1978, and the couple share three adult children together. Weitzman’s 51-year-old son Jed from her first marriage, 42-year-old daughter Zoe, and 38-year-old son Max. He seems pretty happy too; when asked by Parade in 2014 for the secret behind his long marriage, Winkler had the perfect response, “I have to tell you something. I truly believe the ear is the center of all relationships. It's not the heart, it's not the mind, it's the ear. Listening is the beginning and the end.”

More Like This
Andy Cohen's Son Benjamin Had A Hilariously Harsh Review For Cher's Singing
Alec & Hilaria Baldwin Welcome Baby #7, And Revealed Her Cheerful Name
Rihanna's First Post Since Giving Birth Confirmed She's Performing At The Super Bowl
Gabrielle Union Admits She May Be Becoming A Bit Of A Dance Mom With 3-Year-Old Kaavia