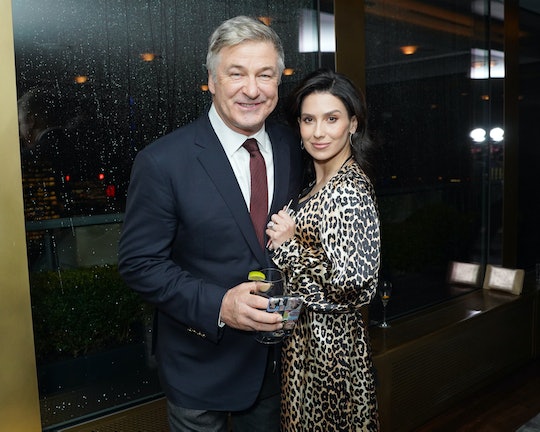 Roughly six months after giving birth to their son Eduardo, Hilaria and Alec Baldwin have welcomed their sixth child together. Hilaria surprised fans with the news Monday by sharing a sweet snap on Instagram of her lying in bed with not one, not two, not five, but six children.

Hilaria captioned her surprise birth announcement with a simple "7" and red heart emoji.

One day later, on Tuesday, Hilaria revealed their new baby's name is Lucia. "We are so in love with our daughter, Lucia," the mom of six wrote on Instagram. "Just like your brothers and sisters, you are a dream come true."

While news of a newborn is always reason to celebrate, the surprise has left many fans scratching their heads given the fact that Hilaria gave birth to her fifth child only six months ago. It's unclear if the child was adopted, born via surrogate, or carried by Hilaria herself. Neither Hilaria nor Alec have publicly shared any information on the child's birth. In fact, New York Times reporter Katie Rosman reported Hilaria's publicist responded with "Not sharing!" when questioned about the child's birth.

Roughly a month after the couple had welcomed their fifth child, Hilaria told People they didn't have any plans to welcome another anytime soon. In fact, she said she thought it felt like they were done having children, but acknowledged she'd said that before. "Everybody's asking me this question," the magazine reported she said. "I don't know. I've said in the past that I was done when I wasn't done. I think, right now, I'm so tired... And I feel, just with COVID, it's just insanity."

"Right now, during times of COVID, it very much feels like we're done," Hilaria added.

Alec echoed a similar message in his own comments to People. "We're oh-so-done," he said.

But while Hilaria has previously said she didn't initially plan on having a big family, she told PopSugar in 2019 that, after birthing three boys in a row, she was on a "mission" to give 7-year-old Carmen a younger sister. "It has now been a mission to give Carmen a sister," Hilaria said. "She loves Ireland, but she wants a baby sister. Basically, my mission is I'm going to keep having kids until it's a girl!" Could that explain the couple's newest newborn?

This article was originally published on March 1, 2021