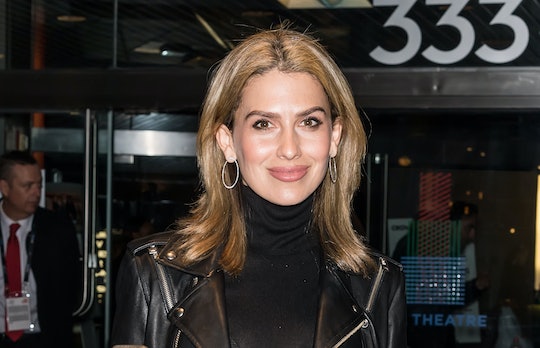 Hilaria Baldwin Returns To Instagram After Her Fake Accent Controversy

"The way I’ve spoken about myself and my deep connection to two cultures could have been better explained—I should have been more clear and I’m sorry."

In a twist absolutely nobody saw coming, at the very tail end of 2020, the internet decided to focus itself on a controversy about Hilaria Baldwin's background and accent. Desperate for something other than the pandemic and a brewing political disaster to focus on, the social media hordes focused themselves on a disappearing/reappearing Spanish accent, a video of Baldwin apparently forgetting how to say "cucumber" in English, and discrepancies regarding where she was born and grew up.

Baldwin, who is married to actor Alec Baldwin, addressed the controversy on Instagram and in a New York Times interview, and then took a break from social media. Things seemed to calm down a bit as the country focused on a few other things, like, oh, an attempted coup, an inauguration, and an impeachment. However, not one to let sleeping perros lie, Baldwin returned to Instagram on Friday, February 5.

“I’ve spent the last month listening, reflecting, and asking myself how I can learn and grow," she wrote. "My parents raised my brother and me with two cultures, American and Spanish, and I feel a true sense of belonging to both. The way I’ve spoken about myself and my deep connection to two cultures could have been better explained—I should have been more clear and I’m sorry. I’m proud of the way I was raised, and we’re raising our children to share the same love and respect for both. Being vulnerable and pushing ourselves to learn and grow is what we’ve built our community on, and I hope to get back to the supportive and kind environment we’ve built together.”

Comments have, it appears, been turned off on this post, her first of the new year.

A Look Back At Last Year's Controversy

It all started right before Christmas when Twitter user @lenibriscoe tweeted, "You have to admire Hilaria Baldwin’s commitment to her decade long grift where she impersonates a Spanish person." They backed up this claim that Baldwin has perhaps exaggerated her Spanish identity with a deep dive into past TV appearances and social media posts by the celebrity yoga instructor.

Baldwin's official CAA speaker's page states she was born in Mallorca, an island in Spain, and was raised in Boston. Earlier this year, Baldwin claimed on the Cocktails and Conversations with Cat and Nat podcast that she came to the United States at 19 to attend NYU, but there's plenty of evidence that she spent large portions of her childhood — and was educated in — in the Boston area.

Additionally, in a lengthy Instagram Story, reporter Tracie Morrissey pointed out that the influencer had not corrected repeated and uncorrected references to her alleged Spanish heritage, including in Spanish magazine Hola!, where she was profiled twice. Numerous sources responded to the thread claiming to have known Baldwin in her younger years and claimed she had no accent and went by the name Hillary.

On December 27, Baldwin took to Instagram to tell her side of the story. "I’ve seen chatter online questioning my identity and culture. This is something I take very seriously, and for those who are asking — I’ll reiterate my story, as I’ve done many times before," she wrote. "I was born in Boston and grew up spending time with my family between Massachusetts and Spain. My parents and sibling live in Spain and I chose to live here, in the USA. We celebrate both cultures in our home — Alec and I are raising our children bilingual, just as I was raised. This is very important to me. I understand that my story is a little different, but it is mine, and I’m very proud of it."

"I've tried in the past to be clear," she said in the accompanying video, "but sometimes people don't always report and write what you say and I've kind of just put my hands up." Baldwin explained that she grew up speaking two languages and that she's always been "a little bit insecure" and mixing the two. Regarding the alleged changing of her name from "Hillary" as she was known by classmates in Boston and "Hilaria," she explained that she would go by either growing up but decided to "consolidate" and go by Hilaria a few years before dating her husband Alec Baldwin in 2011, as that's what her family called her. "It's the same name, just a few letters different," she said. "So I think we shouldn't be so upset about it."

Now that Baldwin has addressed the controversy, here are some things we do know for sure.

She Was Born In The USA

In her Instagram post, Baldwin states definitively that she was born in Boston. An alum of The Cambridge School shared her yearbook photo on Twitter, which revealed she attended high school there under the name Hillary Hayward-Thomas before attending New York University. Of her heritage, Baldwin emphatically stated in her Instagram post that she is "a white girl" but was raised with two cultures, speaking two languages, but that "ethnically, I'm a mix of many, many, many things."

Her American Parents Live In Spain

Both parents, Dr. Kathryn Hayward, a doctor and assistant professor at Harvard Medical School, and David Thomas, an attorney were born and raised in the US, according to a report from The Daily Mail. Internet sleuths have even found an obituary for her grandfather, which places her father's family as having been in America since the before the Revolutionary War. Her parents do currently live in Mallorca, Spain but did not move there until 2011, according to Vanity Fair.

She Shares 5 Children With Alec Baldwin

Baldwin began dating actor Alec Baldwin in 2011 and the pair married in 2012. They have five children together: 7-year-old Carmen, 5-year-old Rafael, 4-year-old Leonardo, 2-year-old Romeo, and 3-month-old Eduardo. The actor has not explicitly addressed the controversy, but took to Instagram on Sunday saying that Twitter is "full of sh*t." Alec Baldwin has previously referred to his wife as Spanish, including during an interview with David Letterman in 2013.

Beyond this controversy, Hilaria has recently been in the spotlight due, in part, to Amy Schumer's Instagram Christmas card — a repost of a photo Hilaria shared of herself Baldwin and her new baby, Eduardo — which the comedian shared in a now-deleted post. Baldwin, it would seem, wasn't too happy, responding on Instagram, "I literally had to have someone explain this joke to me...still don't get it 100%...but... I'll like it and I'll comment some emojis." (Schumer has since apologized.)

More Like This
Alec & Hilaria Baldwin Welcome Baby #7, And Revealed Her Cheerful Name
The Cannon Legacy Is Strong: Here's A Look At All Of Nick Cannon's Kids
Snooki Hints That A Sunday Dinner With All The Jersey Shore Kids Is In The Works
The Complicated Targaryen Family Tree From House of the Dragon Explained

This article was originally published on Dec. 28, 2020