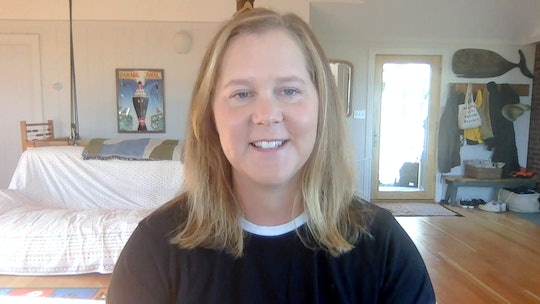 Maybe she and Gene were too busy for a photo?

When you're a mom of a toddler, life is sometimes just too busy to be sitting around getting your photo taken for the annual Christmas card. Sure, you want to wish everyone well and let them know you're thinking of them, but what if you just aren't into getting your picture taken? Here's an interesting fix for you. Amy Schumer's Christmas card features a celebrity postpartum pic and a message from her and son Gene. She might not be the celebrity and the baby might not be Gene, but the message is still just as heartfelt I'm sure.

The Trainwreck actress took to Instagram to share a holiday message with her more than 10 million followers. The message read "Gene and I wanted to wish everyone a happy holiday season. Enjoy it with whatever family members are talking to you this year."

Gene, of course, is Schumer's 19-month-old son with her chef husband Chris Fischer. The photo that went along with the message featured a mom in her underwear holding her baby, it's just that the mom was Hilaria Baldwin and the baby in question was the influencer's fifth child with husband Alec Baldwin, son Eduardo "Edu" Pau Lucas, who she welcomed back in September.

Why not use someone else's photo instead of organizing your own? This feels like a very 2020 decision.

Schumer did not share her thought process behind sharing the photo of Edu and Hilaria Baldwin, but social media users loved it. One social media user wrote "Thank you for keeping it so realistic," while another noted, "I would rather see you and Gene, but this is hilarious."

One person wasn't quite sure what was so funny about the Christmas card; Hilaria Baldwin herself. The mom of five took to her Instagram Story to react to Schumer's post, writing, "I literally had to have someone explain this joke to me...still don't get it 100%...but... I'll like it and I'll comment some emojis."

The I Feel Pretty star is the kind of celebrity mom who has a history of poking fun at the culture of celebrity in general, much as she did when both she and Meghan Markle were expecting their first babies at the same time. She even kept it going when Markle announced she would be stepping down from her royal duties in January by saying that she, too, would be stepping down from her own royal duties with her husband.

Amy Schumer's Christmas card did exactly what a holiday greeting is meant to do; it made people laugh. Feel better. And forget about the nightmare of 2020 for just a minute. Well done.