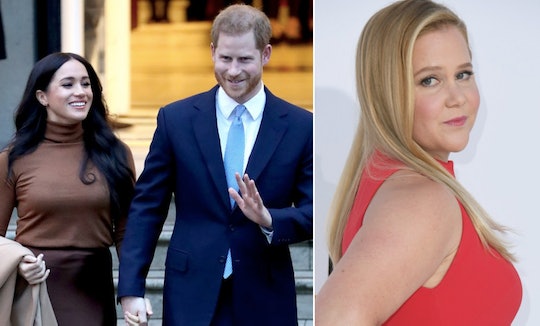 Amy Schumer Is Stepping Down From Her Royal Duties, Too — PHOTO

While not everyone across the pond is up for jokes about a recent and, umm, very huge shake-up within the royal family, Amy Schumer certainly is, poking fun at Prince Harry and Meghan Markle's shocking announcement. On Wednesday, the Duke and Duchess of Sussex delivered some unprecedented news when they revealed that they'd be taking a "step back" from their roles as senior royals, which inspired the comedian to follow suit.

Just hours after Prince Harry and Markle announced on Instagram that they plan to become financially independent once they "carve out a progressive new role within this institution" and that they'd now be splitting their time between North America and the United Kingdom, Schumer chimed in with an announcement of her own... kinda.

"Chris and I are formally stepping down from our royal duties," Schumer joked on Instagram, alongside a hilarious photo of her husband, Chris Fischer, pushing her in a chair on the beach with an umbrella, beach bag, and dog sitting in her lap — oh so regal.

"We appreciate your support," Schumer finished off the caption, which of course also mimicked Markle and Prince Harry's Jan. 8 announcement.

Schumer's friends and followers promptly sent their support and jokes to her and Fischer. "You will always be a royal to me," comedian Rosie O'Donnell commented on her post. "We thank you for your service," one fan wrote, while another perfectly stated, "At least you're going out in style."

This is not the first time that Schumer's life has lined up with the Duke and Duchess of Sussex. You may recall that both Schumer and Markle were pregnant with their respective first children in 2018, and Schumer's pregnancy announcement also took on a royal theme.

In a video filmed for In Style in December 2018, Schumer jokingly called Markle her "nemesis" simply because they were pregnant at the exact same time and she was not going to "let her get away with it." To make things even more coincidental, Schumer and Markle reportedly gave birth to their sons just hours apart from each other in May 2019, according to Access. And when it came time for Schumer to announce the birth of her son, Gene, she referred to him on Instagram as "our royal baby."

Leave it to Amy Schumer to make everyone chuckle as the monarchy deals with a new bout of drama.