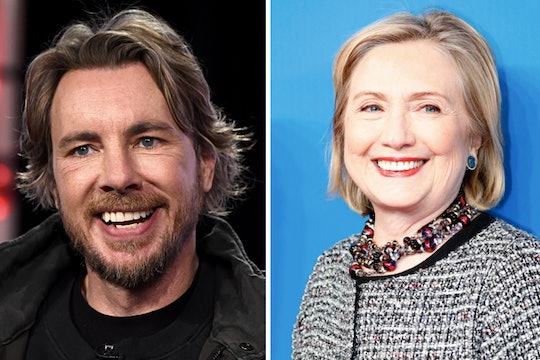 "It's the hardest job I've ever had."

Unsolicited parenting advice is generally seen as a faux pas. But solicited tips from a powerhouse mom who has run for president and sat as the Secretary of State? Obviously a different story. During a recent episode of the podcast Armchair Expert, Hillary Clinton shared some parenting advice with Dax Shepard. To her credit, Clinton waited until Shepard specifically asked and then delivered an insightful and honest answer that was full of kindness.

Shepard recently opened up to Clinton about his own preconceived notions of parenting before welcoming his two daughters with wife Kristen Bell, 7-year-old Lincoln and 5-year-old Delta. "I selfishly and egomaniacally looked forward to raising children, because I wanted to give them the tools that I felt like I had so desperately needed as a kid." He went on to admit he was "nervous" to make mistakes with his girls, a feeling many parents know all too well.

Clinton, who is mom to 40-year-old daughter Chelsea and grandmother to three, tried to set his mind at ease by saying, "You want to try to be aware enough, so that you don't make what you think were mistakes made with you. We all do it, though. There's no escaping from it. We are the products of our own parents' efforts to raise us."

"It's a constant balancing act," Clinton went on tell Shepard. "But that's part of the joy as well as the challenge of being a parent."

That sort of acknowledgment is such a salve for parents in 2020, who have been struggling in ways their parents might not have imagined possible during the pandemic. But Clinton has a history of being empathetic to the plight of parents and doing her best to be supportive. As she said in a 2016 interview with What To Expect, “No one gets through life alone. We have to look out for each other and lift each other up. That’s why I’ve spent my career fighting for kids and families."

Being realistic about expectations and giving yourself a break. Finding balance. Asking for help. All good advice. And all from Hillary Clinton herself.