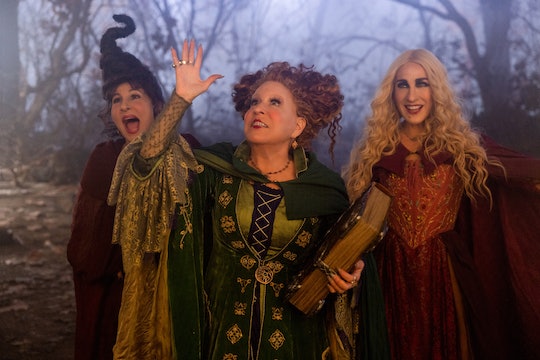 All three Sanderson Sisters have songs on the soundtrack.

Hocus Pocus 2 has finally, actually, genuinely dropped on Disney+ after 29 years of not-so-patiently waiting. And not only are the Sanderson sisters as funny as ever, they’re also adding their voices to a soundtrack that manages to be a fantastic blend of old spooky classics and new songs that are bound to be hits.

The sequel, which was directed by Anne Fletcher, is full of all the elements that fans loved so much from the original. Yes, the original Sanderson sisters are back; Bette Midler as Winnifred, Kathy Najimy as Mary, and Sarah Jessica Parker as Sarah Sanderson. Even better, we all get a look at their origin story, seeing them as little girls themselves who retreat to the forest to avoid being separated. They’ve been accidentally brought back to life by three young women and are joyfully terrorizing Salem, but the good news for the people of Salem? Those Sanderson sisters all come with a set of pipes. And they’re singing on the new soundtrack for Hocus Pocus 2.

Starting strong with their own version of “The B*tch Is Back” by Elton John, changed to “The Witches Are Back” and performed by all three said witches.

Other songs performed by the three Sanderson sisters on the Hocus Pocus 2 soundtrack include a new version of “One Way Or Another” and “Yes Salem, We’re Back,” while Sarah Jessica Parker sings her children-bewitching song from the original Hocus Pocus “Garden of Magic.” Ted Lasso’s Hannah Waddingham also sings a version of “Garden of Magic” on the soundtrack as one of the new cast members. The rest of the tracklist includes:

The Hocus Pocus 2 soundtrack is available for streaming on platforms like Apple Music and Spotify, and if you are planning on having any sort of Halloween party or even a watch party, you know you need to have the Sanderson Sisters themselves singing for you in the background.

Just make sure your kids don’t get bewitched and you should be fine.