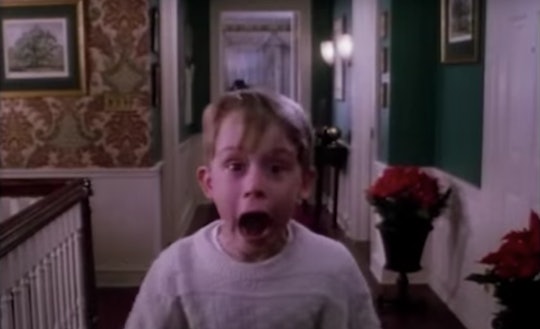 Take A Tour Of The Iconic Home Alone House This Christmas

You know you want to, ya filthy animal.

We all remember it well, I'm sure. The pizza delivery guy stood in a grand foyer waiting to be paid for a stack of pizzas. The McCallisters are running around the house getting ready to leave for France. A "police officer" stands, watching, taking in his beautiful surroundings and, spoiler alert, casing the joint for later. The place is a jewel. And now you can take a video tour of the Home Alone house that was used in the movie yourself. The tour has everything you could want; a bit of nostalgia, a bit of real estate voyeurism, and even a touch of Christmas spirit. I advise watching the tour and then watching the movie immediately after to get the full effect.

The house that was used in the 1990 movie Home Alone (yes, you read that right it's been 30 years) is located in Winnetka, Illinois, around 20 miles outside of Chicago. Back in 2011, it went on the market for sale, and Marissa Hopkins was the broker who eventually helped to sell it for a whopping $1.5 million, according to The Chicago Tribune. Not that the house isn't worth it, of course. As you can see in the video, the house has more than just nostalgic value. It's actually a gorgeous, sturdy home whose exterior, foyer, and living room were all used in Home Alone, according to Vanity Fair. The movie, of course, remains one of the most iconic Christmas films from the last 50 years. Plus that kitchen, give me a break.

A video tour of the 'Home Alone' house is 90's kid heaven.

The video tour was originally shot in 2011 and features Hopkins speaking to the owners at the time, John and Cynthia Abendshien. Well, first Hopkins pretends to be nervous to open the door, a nod to Kevin McCallister's famed antics trying to foil the Wet Bandits who hoped to steal from his home while he was, you guessed it, staying there alone. The Abendshiens owned the house when the movie was being filmed and told Hopkins they decamped to an apartment that had been put together on the second floor of the home to allow cast and crew full access. As the couple explained in the video, "The house is famous, but we're just a family living here."

Home Alone director Chris Columbus put a lot of thought into the kind of house he would use for filming, telling Insider in November for the 30th anniversary of the film, "We needed to cast a house that would work for the stunts and also a house that was visually appealing and, if this makes sense, warm and menacing at the same time. It’s the kind of house if you were a kid it would be fun to be left home alone… I wanted it to feel timeless.”

I would say he pulled that off in spades. The house in Winnetka remains one of the most recognizable in holiday movie history. No wonder Kevin McCallister went to such great lengths to protect it.

More Like This
36 May The 4th Instagram Captions For Every Mood
These 24 Star Wars Quotes About Love Will Make You Feel All The Feels
A Father Of The Bride Remake Is Coming To HBO Max This Summer
Are You There God? It’s Me, Margaret Is Finally Heading To The Big Screen