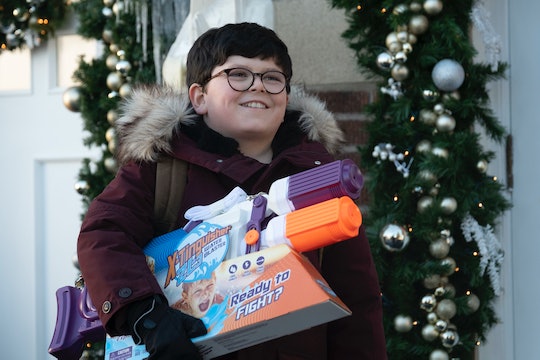 The Trailer For The New Home Alone Movie Coming To Disney+ Is Here!

There is nothing quite like finding that perfect blend of nostalgia, fresh faces, and a great story in a reboot. And that’s what it looks like fans will be able to expect from this new version of Home Alone coming to Disney+. It absolutely leans heavily on the magic that was the 1990 original starring Macauley Culkin as the precocious Kevin McAllister. But this time around, there’s a hilarious new pair of mischief-makers. Plus, if you saw Jojo Rabbit and remember one particularly charming little boy, you’ll be happy to know he’s the one who’ll be fighting off the bandits in Home Sweet Home Alone.

The New Home Alone Movie Is #6 In The Franchise

Home Sweet Home Alone, which is the sixth movie in the Home Alone franchise including sequels and a made-for-TV movie, doesn’t seem to have a screaming McAllister in sight. Probably because the mom went off to become the marvelous Moira Rose. Instead, the new film focuses on Max Mercer, “a mischievous and resourceful young boy who has been left behind while his family is in Japan for the holidays. So when a married couple attempting to retrieve a priceless heirloom set their sights on the Mercer family’s home, it is up to Max to protect it from the trespassers … and he will do whatever it takes to keep them out,” per The New York Post.

Buzz Appears In The Trailer

A new trailer for Home Sweet Home Alone dropped on Oct. 12, and there is at least one character returning to the sequel. Good old Buzz McAllister, who appears to be a police officer checking out reports of suspicious activity. And it’s actually the same actor playing Buzz, Devin Ratray, so you know it’s going to be good.

The Movie Has A Charming Cast

In addition to Ratray, Max Mercer will be played by Jojo Rabbit’s breakout star Archie Yates, also known as Jojo’s sweet, sensitive best friend Yorki. The couple who are intent on breaking into his home will be played by Unbreakable Kimmy Schmidt’s Ellie Kemper and Rob Delaney from the British comedy series Catastrophe.

Home Sweet Home Alone will also star Saturday Night Live’s Kenan Thompson and Chris Parnell, and for the true nostalgic touch, SNL’s Mikey Day and Streeter Seidell, who both worked on the John Hughes’ original, wrote the screenplay, per Variety.

It’s Got A Kid-Friendly Rating

The good news is that you won’t have to wait long for Home Sweet, Home Alone to come to Disney+. The new movie drops on Nov. 12 on the streaming platform, just in time for cozy holiday watching with the family. Of course, if you want a little Home Alone refresher course, you can stream all five of the other movies on Disney+, just to deep dive back into the wild world of young children being left home alone and the bandits who try to rob them.

This article was originally published on Aug. 15, 2021