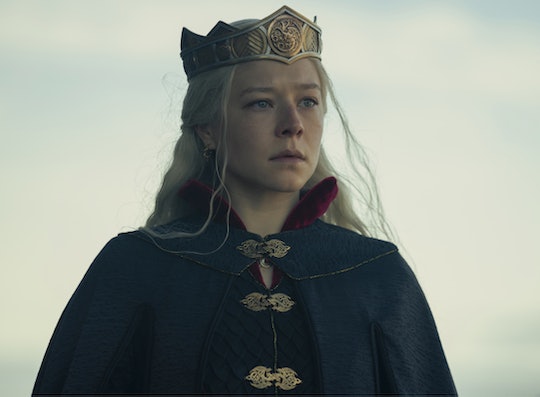 Viewers of the violent show are calling for trigger warnings and for HBO to do better.

Note: Spoilers for House of the Dragon Season 1 finale are ahead.

Fans of HBO’s House of the Dragon know all to well that when it comes to a finale they’re in for an episode filled with fire-breathing drama and jaw-dropping plot twists. The family dragon drama is synonymous with grisly scenes that can be difficult to stomach. But many watchers of the show were still not prepared for the graphic stillbirth scene that aired in the finale, and they’re calling on HBO to do better, or at the very least — issue a trigger warning.

As a prequel to Game of Thrones, fans understand that House of the Dragon will be gory. The death, combat, and often gratuitous violence just comes with the bloody territory of an adaption of George R.R. Martin’s books. But what separates House of the Dragon from its predecessor is just how much of the blood and trauma was depicted, not on the battlefield, but in the birthing rooms. For a season with just 10 episodes, House of the Dragon has already shown three very dramatic and brutal birth scenes, replete with mothers in excruciating pain as well as several deaths.

But in the season finale titled “The Black Queen,” the protagonist and Queen-to-be, Rhaenyra Targaryen, experiences the most visceral and gut-wrenching birth shown on-screen so far. The princess delivers her stillborn baby by herself and literally pulls the lifeless body from her own as her white nightgown becomes soaked with blood. As if that weren’t devastating enough, she is also seen cradling the body and embalming the newborn to prepare for the cremation ceremony.

While it is rare for a TV show to focus so much screen time on pregnancy loss, some fans immediately took to Twitter to warn others of the triggering content before they pick up their remotes.

And while the consensus seems to be that HBO could have at the very least offered a trigger warning before the episode, others did not agree that the labor scene was too much. “People are angry at how 'gruesome' the stillbirth scene was in House of the Dragon? I guess that's because...uh...everything about losing a pregnancy (/baby) *is* gruesome,” tweeted one viewer.

According to the show’s co-showrunner Miguel Sapochnik, the inclusion of these traumatizing labor scenes was very intentional. “We have a number of births in the show and basically decided to give them different themes and explore them from different perspectives the same way I did for a bunch of battles on Thrones, where each time I tried to put a different spine in each so it wasn’t just doing the same thing as I don’t think putting a bunch of violence on screen for the sake of violence does any good in the world,” Sapochnik told The Independent.

With over 9.3 million viewers tuning in to watch the finale, the streaming giant ultimately has a responsibility to the massive audience that’s responsible for its success. News already broke on the show’s official Instagram that House of the Dragon has already been renewed for Season 2. Let’s hope the execs and writers are taking note of what fans are saying, so House of the Dragon can do better to prepare its viewers next time around.