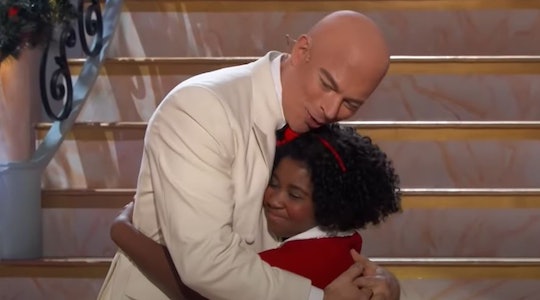 How To Rewatch Annie Live! If You Missed It On TV

Tomorrow is always a day away if you missed Annie Live!. But don’t fret, you can easily rewatch the holiday extravaganza, which premiered live on NBC on Dec. 2, if you missed it live on TV. So here’s everything you need to know.

Starring Taraji P. Henson as Miss Hannigan, Harry Connick Jr. as Daddy Warbucks, Nicole Scherzinger as Grace Farrell, and Young Dylan’s Celina Smith as Annie, Annie Live! is a certified hit. Moments from the show have quickly gone viral on social media, including Henson’s performance, which awed fans with her vocals as one fan expressed, tweeting, “Now I did not know Taraji could sing like this.” Or the kids’ a cappella performance that brought tears to one viewer’s eyes. Making Annie Live! even sweeter, Annie’s dog, Sandy is a rescue dog from Oklahoma.

But enough with the spoilers. If you were just having a hard-knock day and missed this brilliant performance, there are thankfully other ways to watch the replay.

Annie Live! is available to stream on NBC.com with an NBCUniversal Profile or a cable login.

This rendition of the Tony Award-winning hit musical is also available to stream with Hulu’s live TV subscription. Once signed on, you can watch Annie Live! on the Hulu app. The app is available on Roku, Roku TV, Amazon Fire TV or Fire Stick, Apple TV, PlayStation 4 or 5, Nintendo Switch, Samsung TV, LG TV, or any device with Android TV, iPhone, Android phone, iPad or Android tablet.

You can also catch plenty of snippets of the musical on NBC’s YouTube channel .

The latest Annie performance follows the 2014 movie adaptation with Quvenzhané Wallis as the bubbly, curly-haired orphan and Jamie Foxx. And it was that movie that 13-year-old Smith wanted to embody. “I really look up to her (Wallis) as Annie and that's kind of the main one that I studied off of because you know, she's just amazing,” the young actress told Access Hollywood about prepping for her role. “She did amazing on that in that movie and I just love her so much, so she's just an amazing role model for little Black girls like me who watched Annie so I think she in particular is someone that I do look up to.”