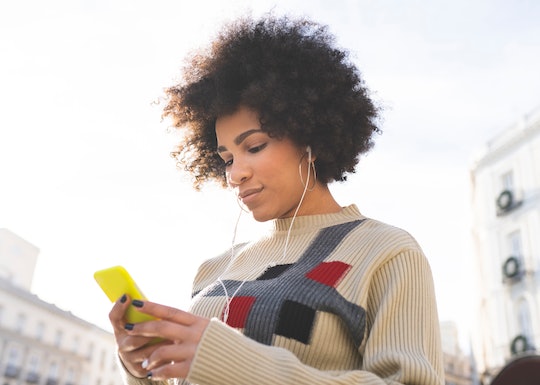 How To Use Headphones With iPhone 11

If you prefer your corded earbuds.

It's strange to think about, but corded headphones are becoming a retro accessory. Well maybe to some people. But if you have a newer phone and want to know how to still use headphones with iPhone 11, you're in luck because it's pretty simple even though newer iPhone models are missing a headphone jack.

The iPhone 11, which came out in 2019, comes in three different models and multiple colors. There's the iPhone 11, iPhone 11 Pro, and slightly larger sized iPhone 11 Pro Max. These phones boast an improved camera quality, extended battery life, and have a gorgeous retina display compared to previous models. But they don't have a traditional headphone jack. So here's what you need to know.

EarPods (Apple's Headphones) Are Not Included

As of October 2020, new iPhones do not include a pair of complementary EarPods, including all three models of the iPhone 11. The only thing included in the box with your iPhone 11 is a USB-C to lightning cable and the iPhone itself, according to Apple. This is part of Apple’s efforts to reach their new environmental goals and reduce waste.

“Customers already have over 700 million lightning headphones,” Apple executive Lisa Jackson announced during the unveiling of the iPhone 12 in October 2020. “And many customers have moved to a wireless experience, with AirPods, Beats, or other wireless headphones.”

Prior to October 2020, iPhone 11 models were sold with a pair of EarPods with the lightning connector. These EarPods plug in to the same horizontal space located on the bottom of the phone where the iPhone charger plugs in. All you have to do is simply plug in the headphones, play the audio of your choice, and enjoy. You can see everything that was included in the original iPhone 11 box when it was released in 2019 in this unboxing video.

No Headphone Jack? Here's What To Do

The once-complimentary EarPods do have a cord, which means that corded headphones aren't completely forgotten. You can still purchase lightning compatible headphones on Amazon for around $20.

Loyal iPhone users are probably used to some big changes. Apple ditched the traditional headphone jack in 2016 when the iPhone 7 was introduced into the world, according to Fast Company. Since then, users have had to use EarPods with a lightning cable, traditional corded headphones with the dongle, or Bluetooth headphones. Although it has been many years (and there have been many iPhone models) since then, some people still get nostalgic for the traditional aux cord.

So Why Isn't There A Headphone Jack Anymore?

Apple reportedly removed the headphone jack because it found that consumers had been purchasing pairs of wireless headphones and the headphone jack, unfortunately, was "an outdated technology," according to Fortune — even if people still loved it.

While Apple might have found the headphone jack to be outdated, some iPhone users out there haven't completely converted to using Bluetooth headphones, and you can't blame them. Some people prefer the cord or don't have the budget to purchase a brand new pair of headphones.

On the other hand, some might be OK purchasing a pair of AirPods, which are Apple's rechargeable wireless headphones. AirPods start at $159, connect to your phone automatically, are compatible with Siri, and allow users to charge their phone while listening to music at the same time. But AirPods aren't your speed, there are other wireless headphones out there.

Sure, the headphone jack or free headphones may never come back to the iPhone. But luckily, there are ways for people with corded earbuds to adapt to this major change.

This article was originally published on Sep. 28, 2019