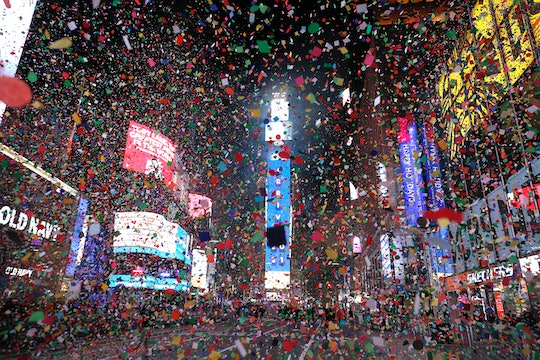 This year is very special because it's the 50th anniversary!

See ya, 2021! The new year is just around the corner and there’s really no better way to ring in 2022 than tuning into the annual Dick Clark’s New Year's Rockin' Eve With Ryan Seacrest. As the title suggests, Ryan Seacrest, of course, is returning as the host and will be joined by co-hosts, Ciara, Billy Porter, and Liza Koshy. What’s more, this year’s event is extremely special because it marks the 50th anniversary of Dick Clark’s New Year’s Rockin’ Eve and you can easily watch it from home. Here’s everything you need to know.

You Can Watch On TV Or Stream It

Dick Clark’s New Year's Rockin' Eve With Ryan Seacrest 2022 will air live on ABC on Dec. 31 starting at 8 p.m. EST. It’ll ring in the new year for the next five and half hours and end at 2 a.m. EST. You can watch it live on TV or on the ABC website and app.

If you don’t have the ABC app or cable, you can also watch the broadcast live on the Hulu+ app or ABC’s YouTube TV. (Both require subscriptions.) And if all else fails, you can count on viral hashtags and clips on social media.

The Co-Host Will Be Located In Different Timezones

No matter what time zone you’re in, these A-list co-hosts will make sure you won’t miss that ball drop. On the west coast, the Level Up singer is returning for her fifth year as co-host in Los Angeles. Ciara will hold it down in Los Angeles at ABC’s Club Quarantine with DJ Nice. Pose star and Tony-award-winning actor, Billy Porter, will have the good times rolling on central time in New Orleans. And Work It actress Liza Koshy, who was a correspondent in 2019, will keep the party jumping on the east coast in New York City's Times Square. Jessie James Decker will also return for her third year as the Powerball correspondent.

There Will Be A Countdown In Spanish

To commemorate the 50th anniversary, there will be a countdown in Spanish for the very first time. Puerto Rico will be the inaugural host for the special moment. It’ll take place at the Puerto Rico Convention Center and DISTRITO T-Mobile, their newest entertainment and nightlife complex. Puerto Rico’s countdown will begin at 11 p.m. EST/12 a.m. AST.

“We are very excited to host Dick Clark’s New Year’s Rockin’ Eve With Ryan Seacrest 2022’ on our Island and to count on this high-caliber event to project the greatness of Puerto Rico and our people,” said Governor Pedro Pierluisi in a statement to Deadline. “This celebration not only allows Puerto Ricans to enjoy this great historic event; it also speaks to diverse communities around the world that our Island is ready to receive tourism and foster economic development. We have so much to offer as a destination, and New Year’s Rockin’ Eve will be a testament to all that Puerto Rico has to offer.”