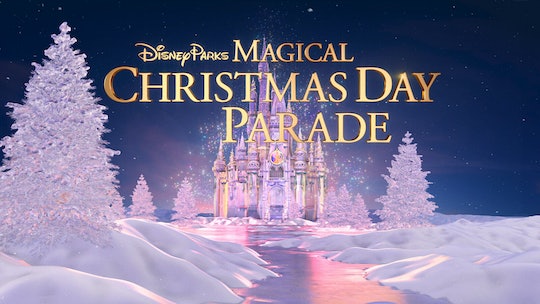 “There’s no better place to spend Christmas morning than the most magical place on earth.”

Start your Christmas morning with some pixie dust! Walt Disney World will be premiering its Disney Parks Magical Christmas Day Parade on Christmas morning and here’s everything you need to know to watch the festive special from the comfort of your home.

Disney Parks Magical Christmas Day Parade has been airing since 1993.

If you’re ever so fortunate to be at Walt Disney World on Christmas Day, it's an unforgettable and magical experience. Unfortunately, tickets to be in the park on Christmas for Mickey’s Very Merry Christmas Party are sold out, but you can still watch the Disney Christmas Parade and get that same magic in your homes. Derek and Julianne Hough from Dancing With The Stars will be hosting the parade from the Walt Disney World Resort in Orlando. Good Trouble’s Sherry Cola and grown-ish’s Marcus Scribner will cover the west coast from the Disneyland resort. grown-ish’s Trevor Jackson will also be aboard the Disney Wish for a musical performance.

The highlight is always seeing our favorite Disney characters in their holiday best. “There’s no better place to spend Christmas morning than the most magical place on earth,” Disney Parks captioned an Instagram post promoting the parade.

How can you watch Disney Parks Magical Christmas Day Parade in 2022?

This year, Disney Parks Magical Christmas Day Parade premieres Dec. 25 on ABC at 10 a.m. EST/9 a.m. CT/8 a.m. MT/7 a.m. PST. It will also be available to stream on Hulu. You can also expect a sneak peek at Marvel’s Ant-Man and the Wasp: Quantumania, premiering in theaters on Feb. 17, 2023.

Celebrities will be on the stage singing a few of our favorite holiday tunes. Sorry, but Mariah Carey is not part of the lineup. But here’s who you can expect: