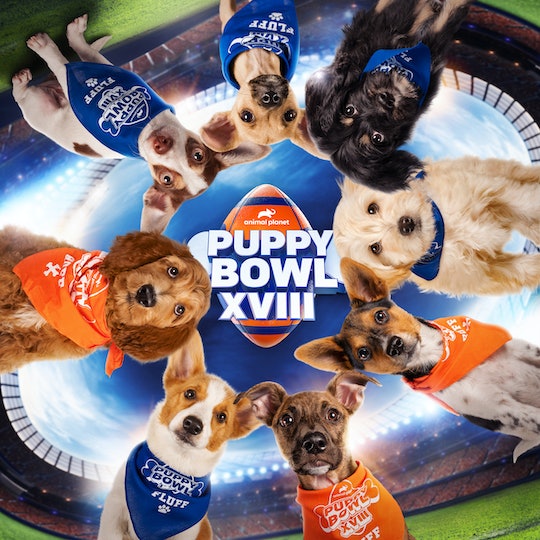 Elmo and his puppy Tango will help kick off this year’s Puppy Bowl.

The tackles, the interceptions, the fumbles, the charges into the end zones — there may be nothing more exciting than watching players vie for the ball on a crisp February day. But I’m not talking about The Super Bowl. I’m talking about the unfurgettable plays of The Puppy Bowl. This year, Puppy Bowl XVIII promises to bring fans even more adorable action as 118 too-cute-for-words puppies romp and play in the Geico “stadium within a stadium.” So mark your calendars, because this is a game you won’t want to miss.

When & Where Will Puppy Bowl XVIII Air?

Puppy Bowl XVIII will air on Feb. 13 at 2 p.m. EST on Animal Planet. The three-hour event will also be available to stream exclusively on Discovery+.

Exactly What Happens At A Puppy Bowl?

Although inspired by the Super Bowl, there are a number of major differences between the year’s biggest football game and the Puppy Bowl. At the top of the list is the fact that the Super Bowl is a closely regulated game with rules and structure while the Puppy Bowl is… well, puppies playing inside a mock model stadium. Of course, that’s not to say there are no rules in a Puppy Bowl, just that they’re a lot more flexible than those outlined by The National Football League (NFL).

In the Puppy Bowl, pup players can “score” points by dragging any one of the many toys made available to them across their team’s end zone. According to Sport’s Illustrated, referees can also cite players for penalties such as “unnecessary ruffness” or “premature watering of the field.”

Who’s Competing This Year? Meet Some Of The Puppy Bowl Players!

Puppy Bowl XVIII is expected to bring fans a record number of puppy participants. According to Discovery+, this year’s Puppy Bowl will see 118 puppies hailing from 67 shelter and rescue groups spread across 33 states hit the field in either Team Ruff or Team Fluff bandanas — that’s the most puppies to ever be featured in a game!

Those pups include Dinozzo, an adorable Basset Hound/Shih Tzu mix playing on Team Fluff; Wes, a sweet-looking Golden Retriever/Chihuahua also playing for Team Fluff; Surf, a fluffy Poodle/Miniature American Shepherd playing for Team Ruff; and Ridley, a Border Collie with one brown eye and one blue eye who’ll play on Team Ruff. Of course, to see all 118 pups in this year’s Puppy Bowl, you’ll have to tune in on game day.

Sesame Street’s Elmo will kick off this year’s Puppy Bowl with the help of his own pup, Tango, who he adopted last year. The pair will oversee the pre-game coin toss, which will determine if Team Fluff of Team Ruff will be the first team to wag their tails. Elmo and Tango are expected to stick around to cheer on their favorite pup player, Wasabi, a Chihuahua/Cocker Spaniel mix under the care of The Sato Project.

What Are The Pups Competing For?

The team with the most points at the end of the game takes home the coveted Chewy “Lombarky” trophy while the pup who scores the most touchdowns will be named the Bissel Pet Foundation Most Valuable Puppy (MVP). Another lucky pup will also be named the winner of the Subaru Of America, INC. Underdog Award

While every single Puppy Bowl player is adoptable, not all will be available for adoption when Puppy Bowl XVIII airs. That’s because the Puppy Bowl is generally filmed months in advance and many of the pups are adopted between when the event is filmed and when it airs.

Those who are still available for adoption, however, will be featured in “Adoptable Pup” segments that air during the game. According to Discovery+, 11 shelters will show off one of the puppies they have up for adoption and another three shelters will highlight kittens that need forever homes. But you don’t have to wait until game day. You can browse some of the adoptable puppies on Discovery’s website right now.

What If My Family Is More Of A Cat Family?

If puppies aren’t your thing (are you serious?), you may still find something to swoon over at Puppy Bowl XVIII. The Kitty Halftime Show will see dozens of adorable, adoptable kittens take the field for a “purr-fect beach party” show. “Audiences will experience the beach-tastic party with these felines having some fun in the sun and learning about their heartwarming adoption stories in the loving new fur-ever home,” Discovery+ teased in a recent press release. Fans can get a sneak peek at this year’s Kitty Halftime Show thanks to the streaming subscription service.