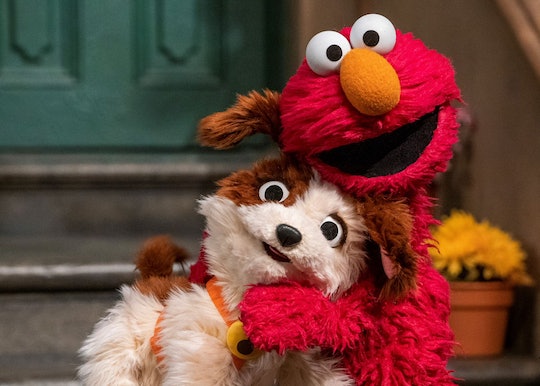 There’s a new friend coming to Sesame Street! Sesame Workshop, the educational nonprofit behind the popular children’s television show, has unveiled plans to have Elmo adopt a puppy named Tango in an upcoming special. Together, Elmo and Tango will teach children proper pet care and play by modeling things like how to safely approach an animal as well as how to gently bathe, brush, and show affection to a pet.

Elmo and Tango will meet for the very first time in Furry Friends Forever: Elmo Gets a Puppy, an upcoming 30-minute animated special set to premiere on HBO Max on Aug. 5. In it, Elmo and Grover find a friendly stray puppy wandering around seemingly lost. Because the puppy loves to dance, they name her Tango after the partner social dance form that originated in Buenos Aires. Elmo and Grover then gather their Sesame Street friends, including Cookie Monster, Abby Cadabby, and Oscar the Grouch, and embark on an adventure to find the local pet adoption fair, where they hope to find Tango a forever home. Get a sneak peek at the animated version of Tango below.

Elmo gave fans a sneak peek at the live-action muppet version of Tango just before Furry Friends Forever: Elmo Gets a Puppy premiered by sharing a few photos of himself playing with the adorable pup on Instagram. “Elmo is so excited to share Elmo’s first selfies with Elmo’s new puppy, Tango!” the caption read. “Elmo loves you, Tango!”

Of course, Tango won’t just appear in the upcoming Sesame Street special. Sesame Workshop has said Sesame Street fans can expect to see the young pup become a regular animated and live-action resident of 123 Sesame Street in the show’s 52nd Season, which debuts this fall on HBO Max and becomes available to stream on PBS Kids in 2022. In fact, the show will continuously use Tango to help teach children pet responsibility.

“The introduction of Tango — who will be a mainstay in future Sesame Street content — allows for consistent modeling of safe behavior and age-appropriate help with a pet,” Sesame Workshop noted in a recent press release. “In the forthcoming special and beyond, Elmo and his friends will show preschoolers how to meet a new animal, gently play with and brush a pet, teach new tricks, give baths, and, most especially, show love and affection for their furry friends.”

While Sesame Workshop has been developing Tango’s character for nearly two years, her introduction couldn’t be more timely as pet adoption skyrocketed during the coronavirus pandemic. Early in the pandemic Time reported industry data from Pet Point estimated the national adoption rate jumped from 58% at the beginning of March 2020 (before many stay-at-home orders were issued) to 85% at the end of the month.

High rates of pet adoption continued throughout the pandemic, with many rescue organizations telling the Washington Post they could barely keep up with demand. “Anyone who felt like, ‘I can’t adopt an animal because I’m at work all day’ is now finding they’re at home,” Mirah Horowitz, executive director of Lucky Dog, told the paper. “People want a pet for companionship and to give kids a sense of responsibility and a playmate.”

More Like This
Three Adorable Wombats Learn To Solve Problems In PBS Kids’ New Show
Here’s Everything You Need To Know To Watch The 2023 Puppy Bowl
Exclusive: Watch How A Group Of Princesses Save The Day In Netflix's New Animated Series
We Ranked The Best (& Worst) Games Our Kids Learned From 'Bluey' — You're Welcome
What Parents Are Talking About — Delivered Straight To Your Inbox

This article was originally published on July 6, 2021