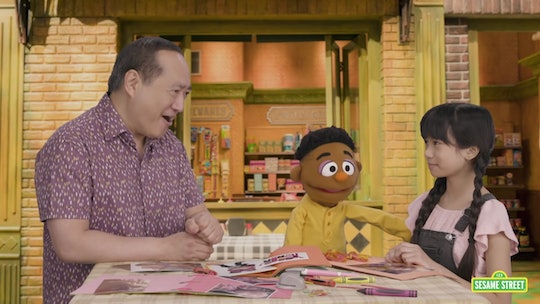 Alan and Wes comfort Analyn after she’s teased about the shape of her eyes with a song titled, “Proud of Your Eyes.”

Sesame Street is tackling anti-Asian bullying with a new song encouraging Asian children to be proud of the features others may tease them for. In a recently-released segment, Alan, a long-time Japanese American resident of Sesame Street, comforts a young girl who has been teased because of the shape of her eyes by singing her a song that notes her eyes help to tell the story of her family and where she comes from.

The Sesame Street segment opens with Alan and Wes, a recently-introduced Black muppet, sorting through photos of Alan’s family while preparing to make a scrapbook. When Analyn, a young girl of Filipino descent, arrives to help it’s clear she’s upset about something.

“I was at the park today and a boy told me I was ugly,” Analyn reveals when Alan and Wes ask what’s wrong. “He made fun of my eyes. He said they looked slanty.”

“That child was wrong to say those things to you,” Alan tells Analyn. “Your eyes are the perfect eyes for you... I understand how you’re feeling because the same thing happened to me and it’s very hurtful.”

When Analyn says she’s still feeling sad about what happened, Alan offers to sing her a song to cheer her up. Through the song, Alan and Wes reassure Analyn that her eyes are not only a beautiful part of who she is but also a window into her family’s history. "Your eyes tell the story of your family,” Alan sings early in the song. “They show where you come from and how you came to be. The color, the shape, and the size should always make you proud of your eyes."

When the song ends, Analyn remembers that her eyes look just like her Filipino grandmother’s, a woman she finds to be beautiful. Alan shares that his eyes look the same as his dad’s. “I’m really proud that I look like him because both our eyes make us special and unique,” he says.

Sesame Street’s "Proud of Your Eyes" segment comes as Sesame Workshop, the nonprofit educational organization behind the popular children’s television show, commits to addressing racial justice issues. In recent months, the organization has launched a number of different resources to help families talk about race and identity.

More Like This
Exclusive Eureka! Clip Introduces Star Of Disney’s New STEAM Preschool Series
'Caillou' Is Officially Getting A CGI Reboot Whether People Like It Or Not
Viral TikTok Breaks Down How Beautifully Bluey Depicts One Character’s Infertility
Sea Monsters, Pandas & Everything Else Coming To Netflix In July 2022 For Families