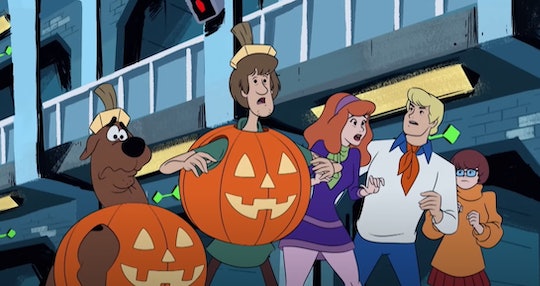 Zoinks! A Brand New Scooby-Doo Halloween Movie Is Coming Out This October

How to watch and stream Trick or Treat, Scooby-Doo.

The episodes, “El Bandito” from Be Cool, Scooby-Doo!, “Headless Horseman of Halloween” from The Scooby-Doo/Dynomutt Hour and “To Switch a Witch” from Scooby-Doo, Where Are You! will also be premiering on HBO Max.

The crew is on a mission to save Halloween in Trick or Treat, Scooby-Doo.

Throughout the 72-minute-long movie, the Mystery Inc. sets off on a mission to save Halloween. The film’s synopsis reads:

“Mystery Inc. has cracked the case to top all cases. They've tracked down Coco Diablo, the head of the notorious costume crime syndicate that colludes The Black Knight, Space Kook and the Ghost Diver. With Coco and her kitty in prison, Mystery Inc. thinks that they can finally enjoy a break. Wrong! Suddenly, menacing doppelgänger ghosts of the Scooby crew and favorite classic foes show up in Coolsville to threaten Halloween. Now it's up to the meddling kids — and their unlikely new partner Coco — to unmask the latest scoundrel and save Halloween! For Shaggy and Scooby-Doo, with trick-or-treating on the line — this time it's personal!”

The trailer for Trick or Treat Scooby-Doo reveals the movie is a spooky good time.

On Aug. 22, Warner Bros. Entertainment debuted the first trailer for Trick or Treat Scooby-Doo, and it looks festive and fun. “Ruh-roh there’s another mystery!,” the company wrote on Instagram.

The new original movie will feature Frank Welker as Scooby-Doo and Fred Jones, Grey DeLisle as Daphne Blake, Matthew Lillard as Shaggy Rogers, and Kate Micucci as Velma Dinkley. So buckle up, the crew is back!

More Like This
Watch An Exclusive Clip From Trick or Treat Scooby-Doo!
The Best Halloween Movies On Hulu To Watch As A Family
Here's Where The 'Hocus Pocus' Characters Are 30 Years Later
10 Facts About 'The Nightmare Before Christmas' That May Surprise You