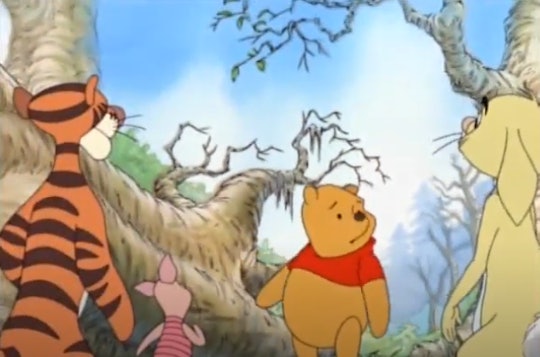 Here's How To Watch Winnie The Pooh: A Valentine For You In 2021

It's a sweet treat for your little loves.

No childhood is complete without an introduction to Winnie the Pooh and his woodland pals living deep in the Hundred Acre Woods. I know PAW Patrol and Peppa Pig reign supreme in modern times, and for good reason. But there is just something so timeless, so kind, so lovable about these characters that beckons a revisit. Especially during the month of love, when kids need a sweet little treat perhaps more than ever. So, of course, you need to watch Winnie The Pooh: A Valentine For You, a 22-minute long holiday special so chock full of calm music and gentle humor that it will lull the whole family into good humor. Guaranteed.

Winnie The Pooh: A Valentine For You first aired in February 1999 as part of a one-hour special. In this special, it seems young Christopher Robin has fallen in love with a girl, and his best pal Winnie the Pooh is worried about his "lovesickness." He recruits Piglet, Owl, Tigger, and Rabbit to help find the cure for poor Christopher Robin, only for Pooh to eventually realize he has to let his friend go love someone else. It's rather sad for the entire gang until they all wake up to discover Valentines from Christopher Robin, showing them he will always love them no matter what.

So the unfortunate thing about Winnie The Pooh: A Valentine For You is that it's not available for streaming on any of the platforms, not even Disney+. But here's how you can watch it.

Buy It On DVD

Winnie The Pooh: A Valentine For You is not available on Netflix, Hulu, or Disney+, but you can rent it for $3.99 on YouTube.

Stream Other Winnie The Pooh Classics On Disney+

And, hey, if you really want to get your kids excited about the gang living in the Hundred Acre Woods, why not introduce them to the original A.A. Milne series? The language is beautiful, the illustrations soothing, and the stories tend towards a lovely sort of nostalgia that both kids and parents will enjoy. There are so many options... all of them worth the effort.