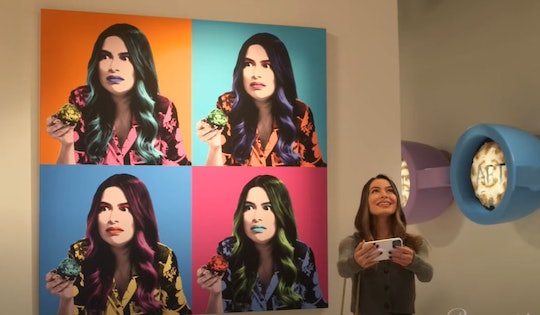 The iCarly Reboot On Paramount+ Is “An Adult Show”

“It’s just really fun to play the character again and see where her life has taken her.”

Nine years later and we’re back with Carly! Nickelodeon’s iCarly is the latest nostalgic series to get a reboot. The show, which first debuted in 2007 and ended in 2012, followed a 15-year-old teenage girl juggling with the overnight, viral success of her internet show. And, now, most of the gang is returning as grown-ups and we know just how kid-friendly the reboot is.

The iCarly Reboot Premieres On June 17

“This is still iCarly, but it's all grown-up now,” Miranda Cosgrove says in a voiceover at the beginning of a trailer released ahead of the reboot’s premiere on Paramount+ on June 17, showing a grown-up cast who look to be up to the same shenanigans. “Welcome to the new iCarly.”

The reboot will navigate through the lives of Carly and her friends as they go through work, love, and family in their ‘20s. All 13 episodes of the series will air on Paramount+. Subscriptions for Paramount+ start at $4.99 a month.

Cosgrove will be reprising her role as Carly Shay. And Nathan Kress and Jerry Trainor will return as Carly’s friends, Freddie and Spencer Shay, respectively.

The cast has said that coming back to the show felt natural and was fun. “Being together on set with the cast again, playing our parts again — it all felt extremely natural, and I know the viewers are in for a treat when the show premieres,” iCarly star Reed Alexander, who plays Nevel Papperman, told CNN.

One Main Character Is Not

One original character who will not be part of the reboot is Jennette McCurdy, who quit the show a few years back. McCurdy played Carly’s friend Sam Puckett on the show, but later she said she “embarrassed” and “unfulfilled” by her role on the show, as Variety reported. “I quit a few years ago because I initially didn’t want to do it,” McCurdy said on a Feb. 24 episode of her Empty Inside podcast. “My mom put me in it when I was 6 and by sort of age, I guess, 10 or 11, I was the main financial support for my family.”

The Reboot Will Introduce A Few New Characters

Is It Appropriate For Little Kids?

The original show was a green light for kids — Common Sense Media recommended it for kids 8 and up — but times have changed. Like the fans, the cast has grown up as well, which means iCarly is pretty much adulting in this reboot.

And from what we know so far, the reboot probably not totally appropriate for little kids. Turns out, there are some PDA scenes parents need to look out for. Trainor told Page Six the reboot will “toe the line.”

But again these are grownups we’re dealing with now. “This is an adult show and it's not specifically for kids,” Kress said in an interview with People. "And that's been exciting for us — to just see where these characters from a kid's show would be and where they are in their life now, 10 years later. But in a very realistic, non-glossy way." In other words, their experiences reflect their age.

So while the trailer looks pretty family-friendly, the show is pretty much an adult one. Parents might want to watch an episode or two first before showing it to their kids. Mark your calendars for June 17!

More Like This
Yellowstone Season 5 Officially Has A Premiere Date
'Clueless' Is, Like, Totally Still A Good Teen Movie In 2022
Here's Why 'Mean Girls' Is A Fetch Movie Choice For Families With Teens
The Summer I Turned Pretty Is A Beautiful Coming-Of-Age Story For Teens & Parents

This article was originally published on June 8, 2021