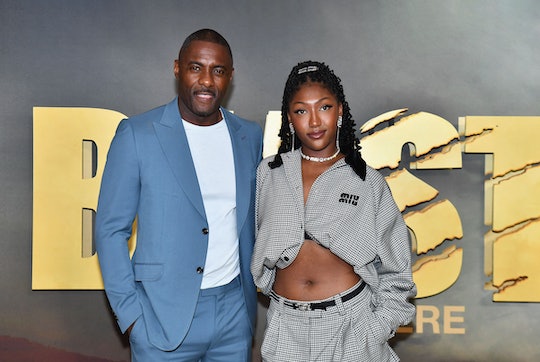 The actor’s daughter Isan auditioned for a role in his new movie, Beast, but didn’t get the part.

Seems like Idris Elba and his daughter were not on talking terms for a little while. The 49-year-old British actor recently shared that his daughter, Isan Elba, 20, did not speak to him for weeks after she failed to book the part alongside her father in his latest film, Beast.

During an interview on the Breakfast Club, Elba said his daughter had not spoken to him for three weeks. “She wants to be an actress and she auditioned,” Elba told co-host Angela Yee. “And you know, it came down to chemistry in the end. You know, my daughter, she was great, but the relationship in the film and the relationship with my daughter was — the chemistry wasn't right for film, weirdly enough. My daughter didn't talk to me for about three weeks.”

Producer Will Packer said that he was the one who called her about not getting the part, calling Isan his “little niece.” Packer explained, “I’ll give props to Idris because a lot of people, you talk about nepotism, like two dads that are like for real, like want the best for their kids but hard on them — Idris Elba and Ice Cube,” whose son, O'Shea Jackson Jr. is also in the industry.

Packer went on to reflect on how Elba dealt with his daughter during the process. “Idris was definitely like, ‘Listen I want her, put her through the ropes, go in, give her a shot, audition. He auditioned with her, he was very tough on her you know. And he said ‘listen at the end of the day we're gonna make the best decision for the movie, I trust you will trust the director Balt [Baltasar Kormákur] and she was very good, very close.”

In theaters now, the movie Beast stars Elba, Martin Battles, and actresses, Leah Sava Jeffries and Iyana Halley as his daughters. The movie is about a doctor who travels to attend a South African game reserve managed by an old family friend and wildlife biologist. But the game turns savage when a lion starts to stalk them.

Although not getting the part was a slight disappointment to her, Elba added that Isan was “very gracious” about not getting the role and attended the film's premiere with him. “I'm really proud of her to go through that, you know what I mean,” Elba said. “And then not get the role, but still come to the premiere.”

Isan is Elba’s oldest daughter with his ex-wife, Hanne Norgaard. He also has a younger son, Winston, with his ex-girlfriend, Naiyana Garth. The Jungle Book star is currently married to supermodel, Sabrina Dhowre Elba.

Elba is obviously very close with his daughter Isan. Long before she was auditioning for movie roles, she was attending red carpets with her dad when she was just 14 years old. He also makes spending time together a priority.

“[Isan and I] have never lived together, but we adore each other and we dedicate time to be with each other. More than anything you have to make time to be with your children,” he shared with Cosmopolitan in 2015. “It's something I battle a lot because of my career, because as much as it's nice to be busy and working, ultimately children don't raise themselves. You've got to be there to help them and guide them through it. That's one thing I try my very best to do. I love being a dad, its an important part of my life.”