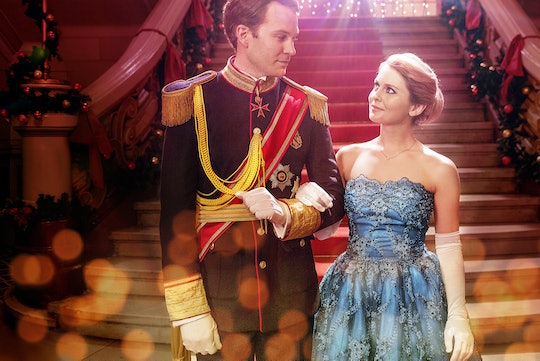 Netflix's 'A Christmas Prince' Will Make You Feel Like Royalty

With the recent engagement of Meghan Markle to Prince Harry, it's not surprising that people are in a royal kind of mood. Thankfully, Netflix recently released a Christmas movie that's perfect for the holidays and will let you imagine what it'd be like to fall in love with a prince. The new film, A Christmas Prince, stars iZombie's Rose McIver as Amber, a reporter who's sent to Aldovia to get some dirt on Prince Richard. But is Aldovia from A Christmas Prince a real country?

Just like Genovia from The Princess Diaries, Aldovia is a made up European country used simply for the sake of the movie. Another concept that's also completely fictionalized is the idea that Prince Richard has a grace period after his father dies to decide if he wants to take the throne or walk away from it. Enter Amber, who goes undercover at the palace as a tutor/nanny to Richard's little sister, Princess Emily. Her goal is simple: supposedly Prince Richard is a playboy and she's out to get proof for her boss so they can run a story about his illicit activities.

However, as is to be expected, Prince Richard turns out not to be as bad as Amber expected. In fact, he's pretty great. Thus, a love story begins. (Bet you didn't see that coming.)

Of course, no love story is easy or perfect, and besides Amber's lie about why she's even at the palace, there are a few other conflicts that arise throughout the story. For one, whether or not Prince Richard wants the throne, there are others who definitely don't want him to take it and would rather they had it for themselves. To make matters worse, a discovery about Prince Richard's past could very well prevent him from becoming king, unless someone is able to find a hidden royal decree that says otherwise.

On top of that, although Prince Richard may not be a playboy per se, he does have an ex-girlfriend who certainly doesn't have his best interests at heart, but could still come between Richard and Amber. With all the odds stacked against them, could this really be true love between Richard and Amber or is this love story destined to fail? You'll just have to watch the movie to find out. Thankfully, it's already streaming on Netflix, so you can watch it today to get into the holiday mood or save it for a little closer to Christmas. Either way, you should definitely make sure to check it out.

Along with Netflix's new Christmas royal film, Lifetime also recently aired a similar movie, titled My Christmas Prince. (Yes, you did read that correctly.) Although the titles are almost exactly the same, the plots are a bit different. In this version of the classic normal-girl-meets-handsome-prince trope, small town teacher, Samantha, brings her boyfriend, Alex, home for the first time only to find out he's not a diplomat, but rather a real-life prince. Surprise!

At the same time, Samantha is offered a once and a lifetime teaching opportunity, however if she takes the job, she can't be with Alex and vice-versa. Is falling in love with a prince worth giving up her dream job or will she choose to let love go and follow her passion for teaching? The movie aired on Dec. 3, but you can catch repeats of it on Thursday, Dec. 7 at 10:01 p.m. EST, Friday, Dec. 8 at 2:02 a.m. EST, Saturday, Dec. 16 at 10:14 p.m. EST, or on Sunday, Dec. 17 at 2:15 a.m. EST on Lifetime. You can also stream it on MyLifetime.com but you will need to log in with a TV provider.

So if you want to enjoy some royals and the holidays, you have two great new movies to watch this season. Make sure to check them out and happy holidays!