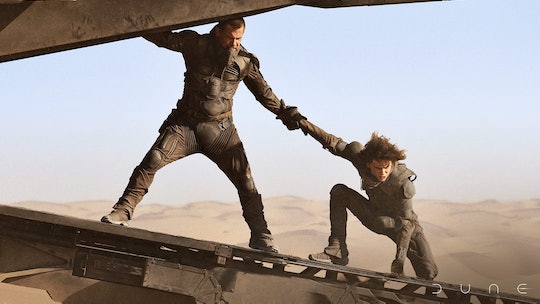 What Parents Need To Know Before Watching Dune With Your Kids

The Oscar-winning film is visually stunning but oh-so-long.

If it seems like everyone has been talking about the 2021 Dune reboot it’s because they are. The Oscar-winning adaptation of the 1984 classic sci-fi movie is jam-packed with amazing talent, incredible special effects, and of course that very specific artistic touch of director Denis Villeneuve. We all want to see it, especially now that it’s an Oscar winner, but is Dune appropriate for kids? Here’s what parents need to know.

The plot centers on a heavy theme.

Dune stars Timothee Chalamet as Paul Atreides, “a brilliant and gifted young man born into a great destiny beyond his understanding,” according to the movie’s synopsis. “[Paul] must travel to the most dangerous planet in the universe to ensure the future of his family and his people,” the synopsis continues. “As malevolent forces explode into conflict over the planet's exclusive supply of the most precious resource in existence, only those who can conquer their own fear will survive.”

The movie is based on the book by the same name written by Frank Herbert in 1965. In this adaptation, Paul is supported by his father Duke Leto Atreides (Oscar Isaac), and mentors Duncan Idaho (Jason Momoa) and Gurney Halleck (Josh Brolin) and eventually his love interest Chani (Zendaya).

Dune has a rating of PG-13 for “sequences of strong violence, some disturbing images, and suggestive material.”

Dune’s rating suggests the movie is appropriate for kids aged 13 and up, and this seems to be pretty accurate. First of all, the movie has a long run time, 155 minutes to be exact. Younger kids will most likely not want to sit in a movie theater watching anything for more than two hours, least of all a movie with a complicated sci-fi storyline featuring an alternate universe with different planets, cultures, and names.

Parents agree Dune is best for kids 13 and up.

Reviews from parents on Common Sense Media noted that there was violence but not terribly bloody. Parents have also noted there’s very little profanity, and the sexual content was really just kissing. That being said, most parents and kids agreed that Dune is best for kids who are at least 12 or 13 years old. Or possibly a very mature 10-year-old. One 15-year-old reviewer wrote that “the movie looks really cool but it was hard to grasp exactly what was going on,” adding, “I feel like people who read the book before watching the movie probably would understand it better.”

Parents and older kids will certainly enjoy watching Dune. If you’ve got younger kids, you might want wait until after they go to bed.

Dune is available to stream on HBO Max.

More Like This
5 Kid-Friendly Movies To Celebrate The Last Day Of School
'Top Gun: Maverick' Is More Tween-Friendly Than The Original
Crate & Kids’s New Back-To-School Essentials Are Just Too Cute
23 Children's Books For Your Dino-Loving Kid

This article was originally published on November 4, 2021