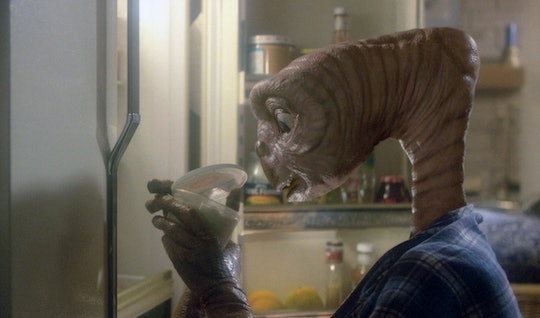 Is E.T. Scary For Kids, Or Do We Just Remember Being Terrified Ourselves?

The 1982 family classic was originally meant to be a horror movie.

The premise of Steven Spielberg’s classic movie E.T. from 1982 really shouldn’t be scary. A benign alien comes to earth, is accidentally left behind by his family, and tries to make his way home by way of a little boy named Elliot. It’s set at Halloween, there’s a lot of candy to be enjoyed. E.T. has no interest in hurting anyone, in fact simply he wants to be friendly and make a little contraption to “phone home,” as the classic saying goes. So why is E.T. so creepy? Is it still scary for kids, or was it just those Gen X and Millennial kids who were terrified?

E.T. Was Originally A Horror Movie

E.T. was originally meant to be a horror movie, according to a 1997 biography of Steven Spielberg. He came up with the concept to write about a family being terrorized by extraterrestrials for a movie called Night Skies, per Uproxx, which was then turned into a more child-friendly tale by screenwriter Melissa Mathison.

As A Family Movie, E.T. Has Some Creepy Details

For starters, when Elliot first discovers his new friend E.T., the alien is living in the backyard. The young boy tosses a ball into the yard and some unknown creature tosses it back. Perhaps that is the key to what so many people find so frightening about E.T. The unknown element. The idea that something is lurking in their backyard is naturally a frightening thought for kids. Anything unknown is pretty scary for kids. Even if it involves Reese’s Pieces.

Also, E.T. might be a benign character but the actual creature created by Rick Baker looks pretty scary. The elongated head, the bulging eyes, the neck that extends way too far. Elliot (played by Henry Thomas) and his siblings Michael (Robert McNaughton) and Gertie (a 6-year-old Drew Barrymore) all scream when they first see E.T., and who could blame them? Not to mention that sound the alien itself makes when he screams. Chills.

Another frightening element of the movie is the scientists who track E.T. down and want to study him. Once they arrive in their white suits and close off Elliot’s home, both he and E.T. get sicker and sicker. Watching adults coldly stand by as they both are sick is pretty scary for younger kids, particularly when their faces aren’t revealed for much of the movie.

So, Is E.T. Too Scary For Kids Nowadays?

While there are articles and Reddit forums dedicated to people who grew up terrified of E.T., it remains to be seen whether E.T. is too scary or simply too emotionally upsetting for kids. As one parent’s review of the movie on Common Sense Media noted, “I'd prepared her ahead of time that there was a very tragic scene towards the end of the movie that could be very upsetting. We held hands during the most emotional moments.” Watching E.T. get sick along with Elliot is incredibly emotional. And perhaps that’s the feeling so many adults remember.

With a PG rating and a warning that some scenes might disturb young children, Common Sense Media recommends E.T. for kids 7 and older and describes it as one of the “family classic” as “one of the best.” As for scariness, the nonprofit notes those elements appear in a few scenes, like as the characters “scream in horror” and when E.T. looks deathly pale.

Where Can You Watch E.T.?

If you’d like to watch for yourself, E.T. is available to stream on Netflix or rent on Amazon Prime and YouTube. Eating Reese’s Pieces while you watch is highly recommended. And bringing a blanket to curl up under... or hide behind, depending.

More Like This
The Little Vampire Is Just Scary Enough
Watch An Exclusive Clip From Trick or Treat Scooby-Doo!
Leonardo DiCaprio Nearly Had A Role In 'Hocus Pocus' & More Fun Facts You Didn't Know
The Addams Family Is Not Exactly As Kid-Friendly As You Remember