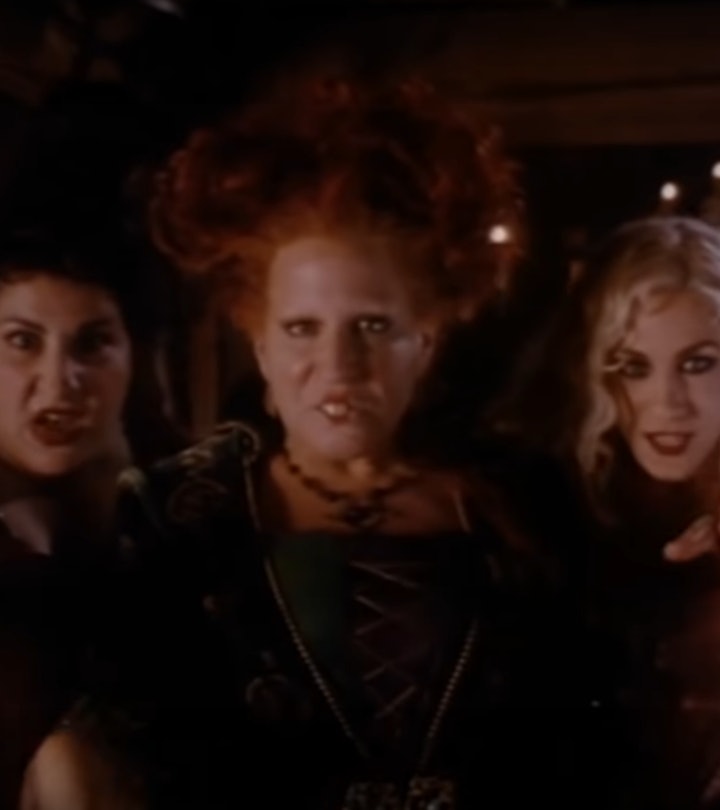 Is Hocus Pocus OK For Kids Under 10 To Watch?

All Halloween-obsessed parents are going to introduce their kids to the Sanderson sisters eventually. But is Hocus Pocus appropriate for kids under 10? It's one of the best Halloween movies of all time so of course you'll be watching, but the question remains as to whether or not some of the more “adult” themes in the classic flick put it outside of the kid-friendly range — specifically for younger viewers.

Hocus Pocus was given a PG rating by the Motion Picture Association of America (MPAA) prior to the film’s 1993 debut, according to IMDB. A PG rating typically means that parents should provide “parental guidance” as “some material may not be suitable for children,” according to the MPAA. In the case of Hocus Pocus, this rating was bestowed upon the film thanks to "some scary sequences, and for language,” FilmRatings.com reported.

As you likely already have seared into your brain, the entire premise of Hocus Pocus revolves around the accidental resurrection of the Sanderson Sisters (because of a virgin) and their plot to consume the souls of children in order to become immortal. Yes, that means they want to eat children. Now, a talking cat and some witty youngsters manage to stop them of course, but if the concept of witches who want to suck the life out of kids is enough to give your little one nightmares, stop right here and wait a while before watching with them. If not, read on.

Of course, all children are different and no one can decide what is appropriate for your children to watch other than you, but it’s a fair assumption to make that parts of the film may be too scary for kids under age 5. In case it’s been several years since you’ve seen the flick, it’s important to note that there are a few more mature moments to consider before you decide if your kids under age 10 can handle watching Hocus Pocus.

While all of the violence throughout the film is based in magic, parents on Common Sense Media warn that a cat getting run over by a bus, a zombie cutting his mouth open, and a little girl having the life force sucked out of her by the witches can be too intense for young kids. While not considered overly scary, the intensity of these scenes could be frightening for some youngsters.

As far as potentially inappropriate language goes, Common Sense Media also reported use of the words “damn,” “wench,” and “moron” throughout the film, as well as the phrase “go to hell.” The use of coarse language throughout the film is infrequent enough that it can still hold a PG rating, but it is something to be aware of when watching with little ones.

Additionally, some of the topics in the movie might be a bit on the mature side for kids under age 10. Repeated references to main character Max's virginity as well as Sarah Jessica Parker's highly suggestive flirtations throughout the film may go completely over little kids' heads, but they also might spark some questions from your kiddos. There are also a few passing references to things like “hash” and “smokes” that could be cause for concern. Being aware of these instances and the conversations you might face if you decide to watch with young kids is definitely worth noting.

While Hocus Pocus definitely gets a little bit morbid, overall it's about a group of kids that get into trouble and find a way out of it. All's well that ends well, right? If your kids can handle a bit of intensity and some language, it’s a go. On its list of "Scary But Not Too Scary" Halloween movies, Common Sense Media says the film is appropriate for kids ages 10+. The Hollywood Reporter calls the movie "rather dark for a Disney-produced children's flick," but it's on their list of 18 kid-friendly Halloween movies that are good for families.

The sweet spot (pun intended) seems to be somewhere in the pre-teen ages. But ultimately no one can decide if your kids are mature enough to handle the film other than you. What it really boils down to is your child’s ability to process fantasy versus reality. Online comments and reviews of the film from strangers are not going to give you the right answer for your kids, but they can definitely help guide your decision and keep you informed.

Even if your kids aren't ready for Hocus Pocus this year, the good news is it's a classic. It will be there for your kids to watch next year, or the year after that. So, if you want to curl up with Hocus Pocus and some Halloween candy after putting them to bed, have no shame. That sounds like a happy Halloween to me.