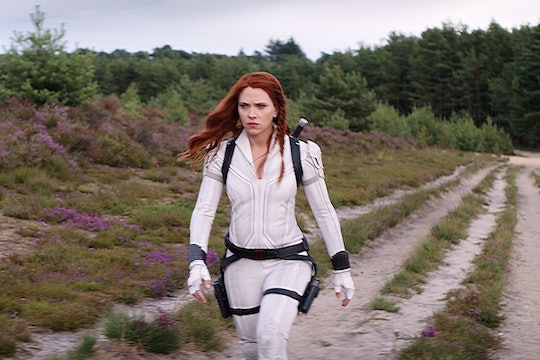 The Marvel movie is action-packed but also touches on a sensitive topic some parents may not be ready to talk about with their little ones just yet.

Black Widow is officially available to all Disney+ subscribers to stream at no additional cost. Starring Scarlett Johansson, the Marvel film tells the origin story of Black Widow, which Marvel fans know later becomes an Avenger and makes the ultimate sacrifice to save the world. But before you add it to your family’s watchlist, here’s what parents of young kids need to know about Black Widow.

Note: Some spoilers surrounding some of Black Widow’s plot points are below.

Is Black Widow Appropriate For Kids?

In Black Widow, Johansson’s character Natasha Romanoff “confronts the darker parts of her ledger when a dangerous conspiracy with ties to her past arises,” according to the synopsis on Disney+. But Black Widow, a spy and trained assassin, isn’t alone on her mission; the story follows Natasha and her long-lost sister Yelena, portrayed by Florence Pugh, as the reunite, join forces, and set off to destroy the Red Room and Dreykov, who is kidnapping and brainwashing young girls.

The action-packed feature film, which also stars David Harbour and Rachel Weisz, has a PG-13 rating for intense sequences of violence/action, some language and thematic material, according to IMDb.

Although it has a PG-13 rating, Common Sense Media recommends the superhero flick is OK for kids ages 12 and up due to violent scenes, think fighting scenes with shooting and stabbing, and cursing.

Aside from the violence that most Marvel movies have, some parents have voiced concerns about scenes that touched on human trafficking. “There is a lot of imagery flashed that is basically human trafficking of young girls shown with Nirvana song and it was jolting,” one parent commented on Common Sense Media. “Then it shows the powerful trafficker selecting specific girls to be trained for assassins. Depending on children's knowledge of trafficking and young girls being subjected to this environment it could be extremely confusing and upsetting.”

More than 25 million are trapped in “modern-day slavery,” and 25% of victims are under the age of 18, according to the nonprofit Human Rights First. It’s a harsh reality that some parents may find hard to explain to young kids. The Borgen Project has a really great description of what to expect about the human trafficking references in Black Widow.

Beyond who’s in and behind the film, Black Widow is really a movie about female empowerment. With strong women in leading roles, themes of sisterhood, and those women reclaiming power, Common Sense Media says the movie is full of positive representation for women who are “strong, clever, intelligent, powerful.”

Ultimately, Johansson put it best in an interview with Empire magazine. “It was so important for [Shortland] to make a movie about women who are helping other women, who lift other women up out of a very difficult situation.”