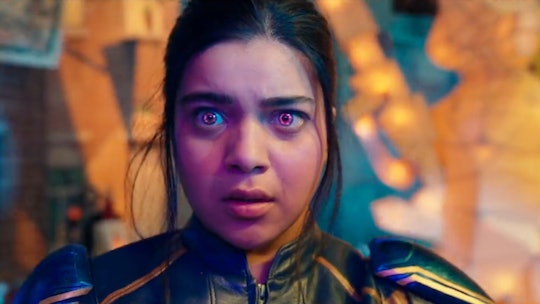 Ms. Marvel dives into so much of what kids are going through in their own lives.

Ms. Marvel is for every comic book fan who dreams of being a superhero. Who stares out the window in a classroom and sees a different world, a different path, a different them. For any parent wondering if Ms. Marvel is appropriate for their kids, the answer is a resounding yes if you want them to see a new kind of superhero who is empathetic, vulnerable, funny, and wise. And, for the first time in history, Muslim.

For those of us unfamiliar with the origin story behind the new Disney+ series, Kamala Khan was first introduced to fans as Ms. Marvel in a comic book back in 2013. Kamala is a 16-year-old student living in Jersey City with her Pakistani-Muslim family. Creator G. Willow Wilson explained that her religion is actually a factor in the story as “an essential part of her identity and something she struggles mightily with,” per the Marvel blog. Wilson wrote at the time that Kamala “has a 'dual identity' before she even puts on a super hero costume. Like a lot of children of immigrants, she feels torn between two worlds: the family she loves, but which drives her crazy, and her peers, who don't really understand what her home life is like.”

Now fans will get to see that struggle on screen for the first time.

A fan-fiction writer becomes a superhero.

Kamala Khan, who is played by newcomer Iman Vellani, is “a great student, an avid gamer and a voracious fan-fiction scribe, she has a special affinity for superheroes, particularly Captain Marvel,” the Disney+ synopsis reads. “But Kamala struggles to fit in at home and at school — that is, until she gets super powers like the heroes she’s always looked up to. Life is easier with super powers, right?”

A trailer for the new series sees Kamala as a bit of a misfit who thinks becoming a superhero will solve everything but, of course, it does not.

Why kids will love it.

Kids will absolutely see themselves in Kamala, who is wry and vulnerable and confused about her place in the world. Kids who also wish they could become a superhero will get a vicarious thrill seeing Kamala’s story unfold; and let’s not forget about the importance of representation here. As the first Muslim superhero, a child of immigrants who struggles to find a balance between her social life and home life and isn’t sure about her identity, Ms. Marvel represents so much of what kids are going through in their own lives.

What is Ms. Marvel rated?

Where can you watch Ms. Marvel?

Ms. Marvel is available to stream on Disney+ as of June 8. The first episode is 50 minutes and is called “Generation Why,” so you and your family will be able to see the entire story unfold over the coming weeks. Get ready to fall in love with Ms. Marvel, the only superhero to discover she has superpowers while attending Avengercon in the most meta of all superhero backstories.

More Like This
'Caillou' Is Officially Getting A CGI Reboot Whether People Like It Or Not
Elmo Talks About Getting His Covid Vaccine In A Cute New Video
Lyle, Lyle, Crocodile Is Heading To The Big Screen As A Musical Comedy
Sea Monsters, Pandas & Everything Else Coming To Netflix In July 2022 For Families