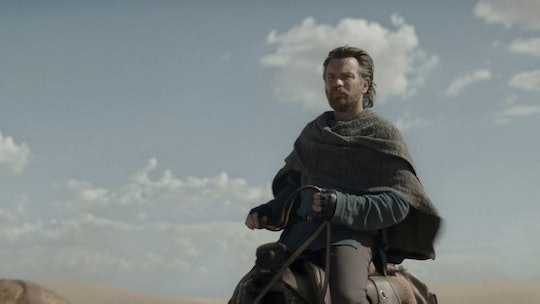 Or this is a Jedi mind trick.

Disney+ has dropped the first trailer for the new six-part series Obi-Wan Kenobi, and it looks incredible. Ewan McGregor is back in his seminal role as the Jedi Master charged with protecting Luke Skywalker, and Darth Vader is stalking around being mad about everything like usual. There are villains and heroes and bounty hunters and light sabers aplenty; in short, it looks like a little Star Wars fan’s dream. But should kids actually sit down to watch it? Or is this one of those shows that feels a bit like it’s for kids but it’s really for adults? Here’s what parents need to know.

Obi-Wan Kenobi picks up where Star Wars Episode III: Revenge Of The Sith left off; Anakin Skywalker has now completed his transition into Darth Vader and Obi-Wan Kenobi is staying on the planet of Tatooine protecting Anakin’s son, Luke Skywalker. In the new trailer for the six-part series, Luke is seen as a young boy living with his uncle Owen Lars, played again by Joel Edgerton, being watched over from afar by Obi-Wan even as Imperial Jedi hunters scour the galaxy looking for him.

It has the lowest age-rating for any Star Wars movie since The Clone Wars.

Little Star Wars fans will find a lot to love about Obi-Wan Kenobi; even the trailer sees plenty of stormtroopers, cool spacecrafts, and of course Obi-Wan just being the coolest. And the good news is, this new series was made with kids in mind. Kids over the age of 9, at any rate.

Disney+ gave Obi-Wan Kenobi a 9+ rating, according to The Direct, which is lower than any of the live-action Star Wars movies (but higher than the 6+ rating for the animated series, The Clone Wars). This rating suggests the new limited series might not be as violent or have as many mature themes as the other films, which bodes well for parents who were hoping to watch with their kids.

When does Obi-Wan Kenobi premiere?

The first two episodes of Obi-Wan Kenobi drop on May 27 on Disney+. After that, the series will stream weekly on Wednesdays until June 22. There will be six episodes in all, and it looks like it’s going to be a wild ride of a series. One parents can enjoy with their older kids, although they might want to watch the first three Star Wars movies to catch up.