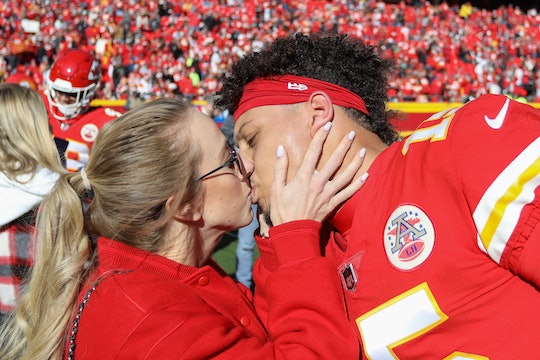 Their daughter Sterling matched her mom in a beautiful white dress.

After spending almost a decade together, Kansas City Chiefs quarterback Patrick Mohames and Brittany Matthews got married. Their most special guest? Daughter Sterling Skye, who was born in February 2021.

Patrick Mahomes and Brittany Matthews got married in March 2022

On March 12, Mahomes and Matthews tied the knot in a stunning outdoor ceremony in Hawaii, surrounded by family and friends. The bride wore Versace, as People reported; a custom-made gown with crystal detailing and a sweeping train. For his part, Mahomes wore a gray suit and vest with bedazzled loafers. Their daughter Sterling wore a white dress, just like mom.

To commemorate her son’s special day, Mahomes’ mom Randi posted a photo from her wedding day, featuring the football star a little boy in a tiny tuxedo. “Wow how the time flies. My boy is married!! I love you always and forever you will always be my first born,” she captioned the side-by-side photos shared on Instagram.

Their daughter Sterling was born in February 2021

In February 2021, Matthews announced the birth of their daughter on Instagram. “Sterling Skye Mahomes,” the new mom captioned the post. “2/20/21 6lbs 11oz.”

One year later, Mahomes celebrated his daughters’ first birthday with a sweet slideshow of photos. “My [heart] turns 1 today! Daddy loves you!” he captioned the post.

The pair first started dating when they were both sophomores in high school, according to Yahoo! Sports. They attended Whitehouse High School in Whitehouse, Texas, and even went to a prom together in 2013, according to a sweet throwback photograph Mohames once shared on his Instagram. And it’s clear to fans that the couple share a strong friendship.

When they celebrated their 7th anniversary in March of 2019, Mohames marked the milestone with a sweet tribute to Matthews. “[Seven] years strong with my best friend," Mohames wrote in an Instagram post marking the date.

Of course, because they had been dating for so long, Mohames and Matthews were no strangers to probing questions about their relationship and future plans. In fact, in an anniversary post shared on her own Instagram in 2019, Matthews delivered a not-so-subtle message to curious fans. "[Seven] years, the greatest 7 years with you! Lots of life changes, lots of growing, lots of surprises, lots of memories," she wrote. "Cheers to a lifetime with you. P.S. — to everyone that's gonna ask when we are getting married, the answer is whenever we want."

Mahomes and Matthews have a lot in common

While Mahomes has quickly made a name for himself on the football field, he isn't the only athlete in the relationship. According to her professional website, Matthews is "a former college soccer player who went on to play professionally in Iceland." After one season, however, Matthews said she realized she loved working out in the gym more than playing on a soccer field. She's now a Certified Personal Trainer, who sells a variety of online workout programs and fitness gear through her company, Brittany Lynne Fitness.

Matthews' love of fitness also appears to be a blessing for Mahomes. In an interview with Yahoo! Sports, the quarterback credited his girlfriend with helping him keep his nutrition on track, suggesting that the pair often work collaboratively toward their fitness goals.

While Mahomes now has two Super Bowls under his belt — an accomplishment no matter how you look at it — the NLF player told KCSP 610 Sports Radio in December that he considers his engagement and Matthews’ pregnancy to be the best things that happened that year.

"Those things are special, that you don't get to happen a lot in your life," he told the radio station. "Being able to be a dad and being able to get married here soon, I'm truly thankful for that… I mean, [winning] the Super Bowl [in 2020] was awesome as well, but those things change your life, and it's bigger than football."

More Like This
Kourtney Kardashian Was Really Upset Her Kids Weren’t Invited To Her Proposal
Christina P Is A “Fierce Mama Wolf” With Her Two Kids With Husband Tom Segura
Michelle Williams Is Going To Be A Mom Of 3!
90 Day Fiancé Stars Loren & Alexei Brovarnik Announce They’re Expecting Baby #3

This article was originally published on Feb. 2, 2020