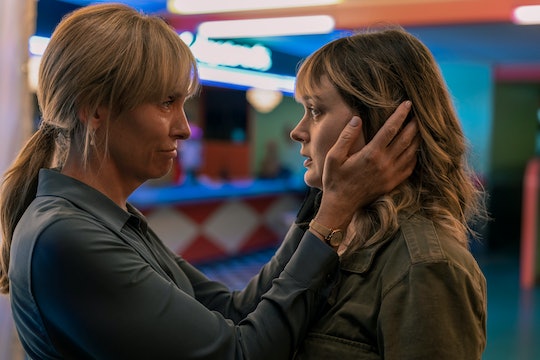 Is There A True Story Behind Netflix’s New Mother-Daughter Thriller Pieces Of Her?

The first few scenes of the Netflix series Pieces Of Her feel very relatable. A 30-year-old woman moves home to help her mom. That mom seems pretty regular, boring even. It feels like the series is going to really just be about that 30-year-old trying to figure out what to do with her life. But it’s so, so much bigger than that. It’s an engrossing series about mothers and daughters and secrets and fear. About how well we really know the people in our lives. About how well we even know ourselves. But, is Pieces Of Her actually based on a real story?

[Warning: Spoilers for Pieces Of Her are ahead.]

Pieces of Her unravels one mom’s complicated story

At the outset of Pieces Of Her on Netflix, Laura Oliver (Toni Colette) takes her daughter Andy (Bella Heathcote) out to celebrate her 30th birthday at a little diner in the town of Belle Isle. Andy is staying with her mom while she figures out what she wants to do with her life, and Laura is a real pillar of the community. She works with veterans who struggle with PTSD, she’s nice and quiet and seems pretty average.

Until a man enters the restaurant and starts shooting. Laura springs into action to save her daughter, slits the man’s throat and gets a knife through her hand in the process.

This is when we start to realize; Laura is not who she seems. There are people who are looking for her and Andy, who is desperately trying to figure out who her mother really is even as she is on the run from these people.

Pieces of Her is based on a bestselling book

So no, Pieces Of Her is not based on a true story. But it is based on the book of the same name by Karin Slaughter that came out in 2018. Not long after her book came out, Netflix announced it was developing a limited series based on the New York Times bestselling novel. The author of 21 thrillers, Slaughter’s Pieces Of Her is the first to get a screen adaptation, even though more than 35 million copies of her books have been sold.

‘Pieces Of Her’ is a new series.

The mother/daughter bond makes the series so great

Heathcote spoke to Marie Claire Australia about what makes Pieces Of Her so gripping, and it’s pretty simple; a mother/daughter dynamic that is complex and shifting and difficult. Something the two actresses sort of internalized, apparently.

“There was either some huge trauma happening or a betrayal or yet another lie,” Heathcote told the magazine. “But any scene that I didn’t have Toni was challenging to do… because I didn’t have Toni to act opposite of and to rise to the occasion for.”

The author gave the series her stamp of approval

Slaughter told HEC Media in 2018 that the people behind the series had included her in the process. “They say they’ll consult me at the end. It’s their project. But they’ve been very generous having conversations with me about characters and motivation and that sort of thing. So, I feel lucky to be included,” she said.

She also noted that she was particularly pleased to see, “a great team of women who’ve worked on Big Little Lies, House of Cards, Homeland, and they’re really professional and they really understand the characters, so I’m looking forward to seeing what they come up with.”

Will there be a Season 2 of Pieces of Her?

No word yet from Netflix on whether or not there will be a second season of Pieces Of Her, but considering the series ended within the same timeframe as the book, it could be pretty unlikely.

If you want more Toni Colette, go back and revisit Unbelievable on Netflix. It’s the story of a young girl who is sexually assaulted and then told she imagined it all; Colette is one of the cops who believes women alongside the delightful Merritt Weaver. There’s also the British series Behind Her Eyes on Netflix, or go really dark with Yellowjackets on Showtime.

More Like This
Our Fav Funny Couple Melissa McCarthy & Ben Falcone Created A Weird, New Comedy Series
The 'Workin’ Moms' Characters Have Changed So Much Through The Years
The Final Season Of Dead To Me Is Officially Coming To Netflix
The New Season Of 'Russian Doll' Tries To Escape Its Mommy Issues On The 6 Train