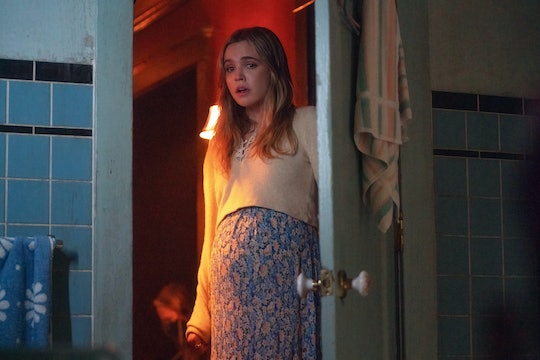 Is Pretty Little Liars: Original Sin Appropriate For Kids? The New Series Is Darker Than Ever

“We're leaning into the horror and the mystery of it all."

Five girls tormented by “A.” Hidden clues. Terrifying experiences. Lies upon lies — Pretty Little Liars is back! This 2010s-era teen show is getting a reboot, much like the equally iconic Gossip Girl did, on HBO Max. This time, there will be more diversity, more jump scenes, and more drama than ever before (but hopefully fewer creepy dolls). So, when the new series premieres on July 28, will you be able to watch it with your kids? You may want to make sure your younger kids and even pre-teens are in bed before pressing play. (Note: spoilers ahead.)

Pretty Little Liars: Original Sin is a ‘horror-tinged drama’ set in the town of Millwood.

If you thought the original PLL was intense, then you may want to watch Original Sin with all the lights on. This new series is billed as a “dark, coming-of-age, horror-tinged drama,” and it’s executive produced and written by Roberto Aguirre-Sacasa, creator of Riverdale and Chilling Adventures of Sabrina, Lindsay Calhoon Bing (Chilling Adventures of Sabrina), Alloy Entertainment (Pretty Little Liars, Gossip Girl, The Vampire Diaries, You) and Warner Bros. Television. I. Marlene King, who developed the original series, is also on board, so you know it’s going to be spine-tinglingly good. This is not a show for the easily scared, that’s for sure.

“Twenty years ago, a series of tragic events almost ripped the blue-collar town of Millwood apart. Now, in present day, a disparate group of teen girls — a brand-new set of Little Liars — find themselves tormented by an unknown Assailant and made to pay for the secret sin committed by their parents two decades ago...as well as their own,” the series’ official logline reads.

The show is set in the existing PLL universe, but in a brand-new, much creepier, town.

The show’s lead, Madison, who plays a pregnant teenager in the series, told Entertainment Weekly, “Pretty Little Liars was the first show I ever religiously watched.”

“My reaction was one of a fan,” she added about being approached for the spinoff, “which was: What are they doing with it, though? I quickly realized that it's not a reboot of the original, it's a reimagination of what worked so well and what people loved, but we're leaning into the horror and the mystery of it all.”

Pretty Little Liars: Original Sin is not yet rated.

Pretty Little Liars: Original Sin is not yet rated, but the original series is rated TV-14 for language, sex, murder, violence, and teen drinking and drug use, according to Common Sense Media.

Original Sin promises more “suspense and horror,” according to the show creators.

“We’re such huge fans of what I. Marlene King and her iconic cast created, we knew that we had to treat the original series as #canon and do something different,” said Aguirre-Sacasa and Calhoon Bring, per Deadline. “So we’re leaning into the suspense and horror in this reboot, which hopefully will honor what the fans loved about the hit series, while weaving in new, unexpected elements.”

Additionally, Sarah Aubrey, head of original content at HBO Max, per Deadline, said it will feature even more “scandal” than the original.

“Roberto and Lindsay are expanding the Pretty Little Liars universe with more murder, mysteries and scandal, and we can’t wait,” said Aubrey.

The trailer alone has plenty of jump scenes, the word “a—” and mention of a suicide. Because of this, parents should wait until their kids are at least 13 to stream Pretty Little Liars: Original Sin.

So if you liked watching Aria, Spencer, Hanna, Emily, and Alison in PLL, lost hours reading your favorite “A” theories on Twitter, or got chills just watching the trailer for Original Sin, then you will love HBO Max’s new series. Pour a glass of wine, get out your investigative hat on, and stream the new series after your kids go to bed!

While you’re waiting, catch up on all seven seasons of Pretty Little Liars on HBO Max.

More Like This
The White Lotus Is The Perfect Thrilling Treat For After The Kids Go To Bed
A New 'Golden Girls' Themed Restaurant Is Happening!
The Worst Fake Babies In The History Of Movies & TV That Will Always Be Unsettling
10 Cozy, Romantic, & Drama-Filled Shows To Watch If You Love 'Virgin River'