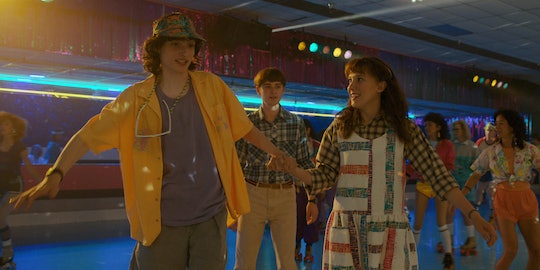 Stranger Things Season 4 Premieres Soon, But Is It Appropriate For Kids To Watch?

The hit Netflix thriller ticks all the boxes for preteens, but not so much for little kids.

A brand new season of Stranger Things is premiering soon after what feels like about two decades of living in the Upside Down without it. We haven’t seen the Hawkins kids in nearly three years, and the new trailer from Season 4 shows they’ve grown up a lot since we last saw them. They’re high school kids now, dealing with high school kid problems and also the usual array of demons desperate to destroy them. This, of course, begs the question: Is Stranger Things appropriate for kids to watch? Here’s everything you need to know. Note: Spoilers for Season 3 of Stranger Things are ahead.

The kids are back in Season 4 and more ‘80s than ever.

After a three year long hiatus, Season 4 Stranger Things sees the Hawkins kids starting high school from a very weird place. Season 3 ended pretty dramatically for the group, after all, with Joyce Byers (Winona Ryder) finally closing the gate to the Upside Down, killing the Mind Flayer monster and seemingly leaving behind a dead Jim Hopper (David Harbour), who had become a father figure to the supernaturally talented Eleven (Millie Bobby Brown). Joyce leaves town with sons Jonathan (Charlie Heaton), Will (Noah Schnapp), and Eleven, who appears to have lost her powers because of the Mind Flayer.

Eleven is back for more adventures.

The trailer for Season 4 of Stranger Things sees Eleven back in Hawkins, walking the halls of her high school alongside Mike Wheeler (Finn Wolfhard). Maybe even rollerskating alongside her other two pals, Dustin (Gaten Matarazzo) and Lucas (Caleb McLaughlin). Of course, it’s not all fun and rollerskating and ‘80s rock ballads. There is always something lurking in the dark on Stranger Things, and this time around it looks like we’ll be getting a bit of a world tour in California and Russia, where we see Hopper return. The problems look a bit more grown up... a bit too grown up for young kids to understand and handle.

Stranger Things is too dark for kids.

The sci-fi drama is really best for kids over the age of 13 who can handle darker themes like death, guns, and monsters living in an alternate reality who want to feed off children. There’s also the incredibly disturbing idea that scientists who work for the government are experimenting on children, a subject that is obviously far too upsetting for younger kids to watch.

The series is rated TV-14 for scenes of violence, profanity, and mature subject matter. For kids over the age of 13, however, it’s a great show for parents to watch with their kids, particularly parents who grew up in the ‘80s and can discuss all of those amazing cultural touch points that the Duffer brothers pull off so well. Common Sense Media also notes that there is some sexuality in the series, like when two young kids sneak off to a school bathroom to make out. Overall, the nonprofit notes it’s best for kids 13 and older.

Volume one of Season 4 of Stranger Things drops on Netflix on May 27, and fortunately Volume 2 drops on July 1. So now you know what you and your preteen will be doing for the summer.