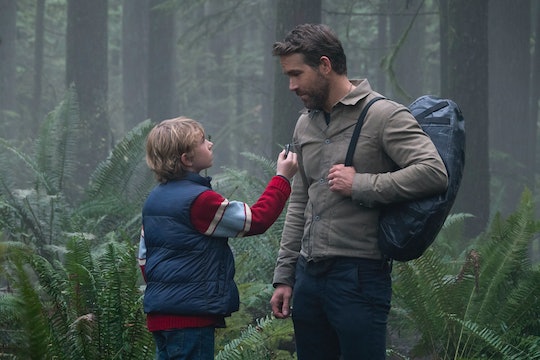 The Adam Project Is A Fun Sci-Fi Adventure Movie, But It's Rated PG-13 For A Reason

The plot alone requires a significant amount of maturity.

The Adam Project on Netflix is essentially a perfect recipe for a classic, feel-good adventure flick reminiscent of movies like Raiders of the Lost Ark and E.T. — essentially all of those Gen X nostalgia picks. But, just as with those beloved classics, The Adam Project might not be totally appropriate to watch with your little kids.

The new Netflix film is heavy on the humor, sure, but there are plenty of dark, heavy moments woven through all of those spacecrafts and cool sci-fi special effects. Plus, the plot alone requires a significant amount of maturity to follow since time travel is involved. So, yes, there are a few elements to this movie that make it better for tweens and older kids. Please note there are some mild spoilers ahead, but here’s everything you need to know before watching The Adam Project with your kids.

The year is 2052, and time-traveling fighter pilot Adam Reed (Ryan Reynolds) accidentally crash lands in 2022 along with his wife Laura (Zoe Saldaña). He finds himself having to lean on a 12-year-old version of himself (Walker Scobell) in an attempt to save the future. How do the two Adams plan to do that? They have to connect with their mutual dad, Louis Reed (Mark Ruffalo) who invented time travel and tell him not to invent it.

The two Adams have to fight off bad guys in spacecrafts wielding swords and guns and light sabers, all while trying to find a way to deal with each other.

There are some heavy, mature elements

There is some drinking and a significant amount of violence in The Adam Project, although it doesn’t tend to be too bloody or graphic, according to Common Sense Media. It is more stylized with light saber fights and cool chase scenes. But beyond the violence, which might steer some parents away from The Adam Project, is the heavy material. Adam’s dad dies when he is very young, and he and his mom Ellie (Jennifer Garner) struggle terribly because of it. There is a lot of sadness, regret, and misunderstanding that could bring on some pretty complicated, big feelings in younger kids.

The Adam Project has some solid lessons for tweens

One of the ongoing struggles in The Adam Project is that adult Adam has such bad memories of the 12-year-old boy he once was. In his words, “I’ve spent 30 years trying to get away from the me that was you.” Ultimately, however, he learns, “You were the best part all along.”

What an absolutely beautiful lesson for kids, perhaps especially tweens who might be feeling out of sorts with their identity, struggling with difficult moments, and to learn that they are “the best part” of their own lives right now.

Plus there is some sarcastic, easy humor in The Adam Project that will absolutely appeal to that age group, especially since it is coming from Deadpool himself, Ryan Reynolds.

The Adam Project is rated PG-13

Yes, The Adam Project is rated PG-13 for violence/action, language and suggestive references.

The Adam Project is streaming now on Netflix. So if you’re looking for something to stream for family movie night, just put the younger kids to bed and bond with those tweens over an adventure movie with a heart. It’s pure gold.

More Like This
The Best Family-Friendly Movies To Get You In The Mood For Summer
Are You There God? It’s Me, Margaret Is Finally Heading To The Big Screen
Zac Efron Was Asked If He Wants Kids & His Hilarious One-Word Answer Says It All
A Father Of The Bride Remake Is Coming To HBO Max This Summer