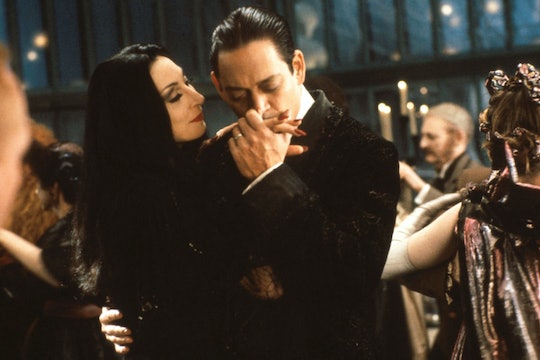 When sitting down to watch movies we all enjoyed as kids from the ‘90s, it’s often a good idea to give them a good once over before introducing them to your own little ones. The barometer for what might be appropriate and what is a terrible idea was, let’s say, a little looser back in the ‘90s. And sometimes the movies we remember might be a shade further down on the appropriateness scale than we would like. No offense at all to the 1991 version of The Addams Family we all know and love, but it’s not exactly as kid-friendly as you might remember from when you were, in fact, just a kid yourself. So here’s what you need to know.

Morticia and Gomez Addams have always run a ghoulish household.

Based on the original New Yorker comics from Charles Addams and the television series of the same name from the ‘60s, The Addams Family tells the story of a rather unusual family. Mom Morticia (played perfectly by Angelica Huston who was made for the role) and dad Gomez (Raul Julia) are raising their two children Wednesday (Christina Ricci, ‘90s queen of spooky children) and Pugsley (Jimmy Workman) in their gothic home that looks like something straight out of a Tim Burton film. Everything is fine in their bizarro world of torture and misery until someone claiming to be Gomez’s long-lost brother Fester (Christopher Lloyd aka Doc Brown from Back To The Future) returns to the family. And works with the family’s sinister lawyer Tully Alford (Dan Hedays) to get his hands on their fortune... before realizing that this is the family he’s always wanted all along.

Why it’s a little too dark for young kids.

The Addams Family is a funny movie but the laughs come from some fairly dark places. There’s a lot of talk of torture in the film, and even though Wednesday and Pugsley are meant to be likable, you definitely don’t want your kids emulating their behavior. Like spraying the audience with stage blood at their school play, for instance, or chasing each other with axes and such.

Then there’s all the sexual innuendo between Morticia and Gomez. They lay it on thick enough that preteens might even pick up on all those double entendres.

Why older kids will love it.

Common Sense Media notes that kids over the age of 12 will probably like this movie, and that feels about right. The language is pretty mild, and Wednesday’s sardonic humor should track with kids in that age group. Also the esthetic should be appealing to kids who are into that gothic look... and let’s not discount the family Halloween costume inspiration. Especially if you have someone in the family tall enough to play Lurch.

Where can you watch The Addams Family?

The Addams Family is available to stream on Netflix, Paramount+, and Amazon Prime Video. Even if you don’t want your kids to watch it, it’s a fun Halloween revisit for all ‘90s kids who worshipped at the altar of Wednesday Addams.

More Like This
David Harbour Transforms Into A Santa No Kid Wants To See In 'Violent Night'
All The Nights The Grinch Airs On TV In 2022
How Old Should Kids Be Before They Watch The 'Christmas Story' Sequel?
How To Watch Elf In 2022, Including A 24-Hour Marathon