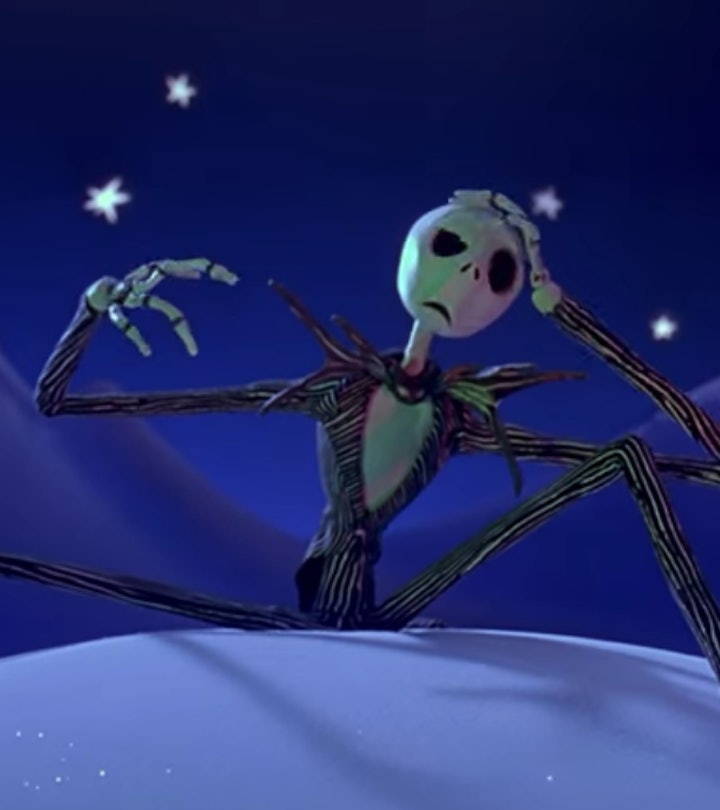 Is The Nightmare Before Christmas Too Scary For Kids Under 5?

We take a look at what age can watch The Nightmare Before Christmas without getting ho-ho-horrible bad dreams!

The Nightmare Before Christmas is rated PG.

The film tells the story of the misadventures of Jack Skellington, the king of Halloween Town, who gets bored with his normal routine of scaring humans from the "real world." When Jack stumbles upon the much happier, warm-spirited Christmas Town, he schemes up a plan to kidnap Santa Claus and take the town as his own. But alas, the best laid plans of skeletons often go awry.

In typical Tim Burton fashion, there are the standard frightening looking monsters, which are usually harmless yet potentially scary images (like the child who wears a hatchet in his head like a hat). The movie’s opening number (“This Is Halloween”) gives a pretty good idea of the sort of creepy that’s in store for the rest of the movie.

Characters (painlessly) take off their own limbs and heads, and there is a villain named Oogie Boogie who could be frightening. Common Sense Media suggests the film is suitable for children aged 7 and older (parent and kid reviewers on the site unilaterally agree, which is somewhat rare on the site).

So, is The Nightmare Before Christmas dark?

Yes… and no? It’s got all the happy songs, on a bleak, goth backdrop. It’s emo Christmas at its strangest, and there are definitely some scarier elements. In a lot of the ways Wizard of Oz and Willy Wonka and the Chocolate Factory are scary for some kids (and some adults, that boat scene is freaky), Jack and friends will be scary as well. So if your kiddo is scared of the Wicked Witch of the West, they might be scared of this movie. (Though I’d contend the boat ride down the chocolate river in Willy Wonka is scarier than anything in Nightmare.)

We asked some IRL moms what they thought.

We spoke to some real parents to get their opinions about showing this film to younger viewers, too, and results were fairly steady across the board.

Sam, mom of three girls ranging from infant to school-aged, tells Romper, “If It weren’t for The Nightmare Before Christmas playing on a loop between October and January, I’d never get any work done. If it’s too scary for them, I expect I’d know by now. I don’t think it’s anywhere near as terrifying as The Witches, and my sister made me watch that as a toddler.”

Erin, a mom and former kindergarten teacher, tells Romper, “If your kid is easily spooked, watch it with them. If you see they aren’t taking it well, turn it off.” Like most things, it’s all about knowing your kids. Mine were both obsessed — and have been since they were toddlers — but that’s not going to be true for everyone.

Why is The Nightmare Before Christmas so good?

The movie has not only withstood the test of time (it came out almost 30 years ago), but it seems only to have increased in popularity, launching directly into the “icon” stratosphere. I think this comes down to a few things: the unique character design, the incredible score and songs by Danny Elfman, and the fact that, even now, in an age of heavily computer animated films, people have to ask “Is The Nightmare Before Christmas actually stop motion?” because the painstaking, time consuming process is so incredibly smooth and timeless.

Overall, we think this is generally a great movie for kids — anecdotally kids of all ages seem to enjoy it — but no one knows your child like you. If you're unsure of how they will react, consider watching the movie with them, paying close attention to their reactions and, if needed, pausing at scary moments to ask them to explain how the film makes them feel. Along with the other scary images and themes that circle at Halloween, the movie may or may not add to your child's fear of (or acceptance of) the scary images in the movie.

More Like This
The Best Valentine’s Day TV Episodes For Kids
25 Sweet Movies Families Can Watch Together On Valentine’s Day
20 Songs About Love, Friendship, & Family To Listen To With Your Kids On Valentine's Day
Marcel The Shell Is Heading To The Oscars!
What Parents Are Talking About — Delivered Straight To Your Inbox