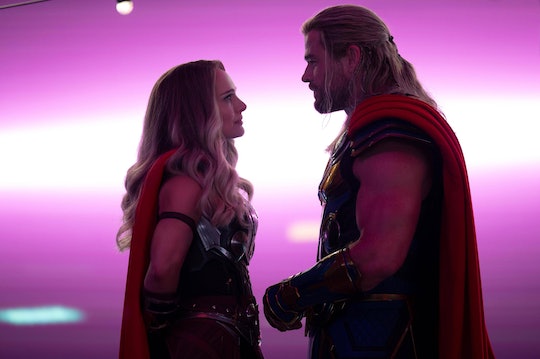 Thor: Love & Thunder Shows Us The Softer Side Of The God Of Thunder

Thor’s all about love this time around.

Seeing a Marvel movie in an air-conditioned theater on a hot summer night is one of those checkmark moments over the school holidays. So we’re pretty lucky that this year, we have Thor: Love and Thunder to look forward to. The sequel to Thor: Ragnarok is out in theaters now, but should you bring kids to see this one? What age is Love and Thunder appropriate for? Here’s everything you need to know.

What is Thor: Love and Thunder about?

After receiving rave reviews for Thor: Ragnarok, Taika Waititi returned to the director’s chair for Thor: Love and Thunder. This time around, fans are introduced to a new side of the God of Thunder — retirement. The movie sees Thor, played as ever by Chris Hemsworth, doing his best to live a peaceful existence. That peaceful dream is shattered, however, when Gorr the God Killer (Christian Bale) sets out to destroy all gods. He enlists the help of King Valkyrie (Tessa Thompson), Korg (Waititi), and his ex-girlfriend Jane Foster (Natalie Portman), who can suddenly wield Thor’s hammer, to combat the new threat. All with that light humor that has become Waititit’s signature.

This movie might be about fighting bad guys, but it’s also about love. Mainly Thor’s love for Jane, who he is still mooning over after more than eight years. It makes for good, silly fun and is certainly a nice lesson for kids, that even big tough guys like Thor can be soft and mushy. But there’s still a lot of action in the movie that could be frightening for little ones.

Be prepared for comic book-style violence.

Common Sense Media notes that there’s a lot of hand-to-hand combat in the movie and some weapon use, and while the focus might be less on violence than on love and humor, it’s still a part of the movie. Plus, Christian Bale is decidedly menacing in his role as Gorr the God Killer, almost like he didn’t get the comedy memo. So parents might want to be prepared for that.

The fourth Thor movie is rated PG-13 for “intense sequences of sci-fi violence and action, language, some suggestive material and partial nudity.” It’s important to note that all of the previous Marvel movies have had the same rating, so as a rule of thumb; if your kids were okay with the other ones and you were comfortable with the content, you should be fine with this new movie as well.

Thor: Love and Thunder is now playing in theaters across the country.