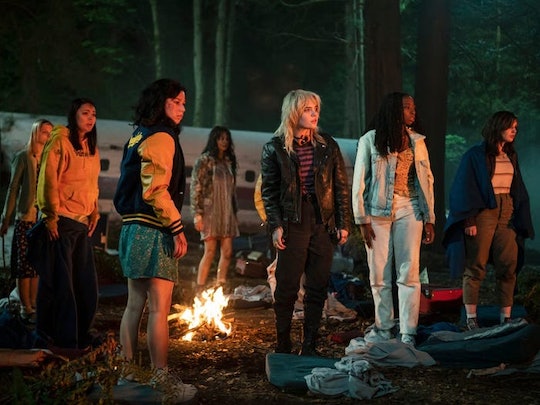 Most of us read Lord Of The Flies in high school probably. By the time the teen years hit, many kids are ready to weather a little darkness, to read about a little devolution of society in the woods. Reading the premise of the drama series Yellowjackets, you could be forgiven for thinking that the show is a female-driven version of the same. That your older kids might be okay with watching Yellowjackets. Well, a little bit of yes and a whole lot of no.

Yellowjackets Is Definitely, Definitely Not For Children

If cannibalism is not on your list of what your kids can watch, go ahead and skip Yellowjackets. In fact, the series really checks all the boxes in things kids probably shouldn’t be consuming on television, including substance abuse, graphic violence, multiple sex scenes, and “a copious number of swear words as well as horrifying scenes,” according to Common Sense Media, which gave the series a TV-15 rating. Notably, parents on Common Sense Media gave the series an 18+ rating, while kids felt 14 and up would be fine.

Let’s err on the side of parents with this one.

It All Starts With A Plane Crash

‘Yellowjackets’ is not for kids.

What happens when a high school girls’ soccer team’s plane crashes in the remote wilderness? The survivors start off trying to work together but eventually they devolve into savage clans who end up killing and eating each other. Well, some of them get eaten. Others are rescued and, 25 years later, are still trying to figure out how to truly escape all that happened in the wilderness. Showtime calls Yellowjackets “part survival epic, part psychological horror and part coming-of-age drama” and let’s just say it’s heavy on the psychological horror part.

And Then Follows Women With Serious PTSD

It isn’t just those flashbacks in the forest that are cause for concern. Yes, seeing girls savagely chasing each other down to eat them in the worst campfire scene you can imagine are already a big red flag for kids’ programming. But when those girls become women, namely Shauna (Melanie Lynskey), Natalie (Juliette Lewis), Taissa (Tawny Cypress), and the perfectly terrifying Misty (Christina Ricci), the wilderness is clearly still alive within them. They are all struggling with some form of PTSD, trying to move on with their lives, but the wilderness will not let them go. Especially once they all start getting postcards from a mysterious person as a reminder of what happened in that wilderness. As Shirley Li of The Atlantic wrote in her review, “In this stew of hormones, gore, and mordant farce, the series captures the way that growing out of girlhood is an inherently brutal and absurd process.”

And she liked it.

Yes, Yellowjackets is rated TV-MA, and definitely earns that rating. Some of us adults might not be quite mature enough to watch.

Yellowjackets is available to stream via Showtime. If you have Hulu, you can watch the series with the Showtime add-on. You can also catch up on the series on PlutoTV... after the kids go to bed. But not too late; you’ll want something comforting to watch before you go to bed. Trust me.

More Like This
The White Lotus Is The Perfect Thrilling Treat For After The Kids Go To Bed
The Worst Fake Babies In The History Of Movies & TV That Will Always Be Unsettling
10 Cozy, Romantic, & Drama-Filled Shows To Watch If You Love 'Virgin River'
'Virgin River' Fans Can't Stop Cracking Jokes About How Charmaine Is *Still* Pregnant