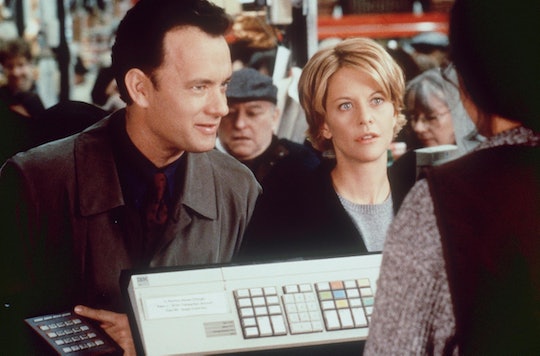 There’s nothing quite like falling in love in AOL chat rooms.

It’s important to give kids a history lesson they won’t learn in school sometimes. A glimpse at the advent of historic events they simply take for granted now. Why romantic comedies have such satisfying tropes, for instance. What online dating might have looked like before online was really a thing. Why people love Tom Hanks like they love puppies and kittens. In other words, watch You’ve Got Mail with your kids. It might not be super appropriate for younger kids, but it is a window into a very specific time and place that continues to resonate today. Also it’s a masterclass in witty repartee, thanks to the Ephron sisters.

You’ve Got Mail, directed by the incomparable Nora Ephron and written with her sister Delia Ephron, was released in 1998. Just before the turn of the century, when dial-up internet was still a baby and the world was figuring out how to communicate online. Enter Joe Fox (Tom Hanks wearing all sort of cable knit sweaters), owner of Fox Books, which is basically a Barnes and Noble type franchise. Joe has met a woman online in an AOL chat room for people in New York City who are over 30. Yes, this was really a thing, kids. It turns out, that charming woman he is falling for is Kathleen Kelly (Meg Ryan in various twin sets and a short shag that became iconic for that era), owner of an independent children’s bookstore called The Shop Around The Corner. Their stores are fighting for the same customers, they become sort of enemies in person until Joe finds out Kathleen is the woman from his chat room.

The movie has a wholesome cast of characters.

The plotline of You’ve Got Mail might be complicated and full of twists and turns, but it is also surprisingly wholesome. Certainly wholesome enough to watch with your kids. There are no sex scenes, the swearing is minimal, and the general vibe of the movie is very comforting to watch.

Common Sense Media recommends the movie for kids over the age of 10, and this feels pretty on the nose especially since kids under that age wouldn’t be terribly interested in the story. But kids over 10 might find it interesting simply because for historical purposes. The advent of the internet especially. Hearing that old dial tone, not to mention Kathleen’s boyfriend Frank (Greg Kinnear) waxing poetic about his typewriter and complaining about “modern” inventions like the answering machine... it’s a real time warp.

But there is a lack of diversity.

While parents and kids might enjoy the nostalgic element of You’ve Got Mail, it’s important to talk to kids about the painful lack of diversity in the movie. Otherwise kids might think that New York City in 1998 was a city with white straight people with lots of money living in brownstones and complaining about dial-up.

You’ve Got Mail is rated PG.

You’ve Got Mail is rated PG for some strong language. It also might be a good idea for parents to watch with older kids to talk about some questionable conversations in the movie; Joe fearing that Kathleen might be too unattractive to hold his interest, for instance, and there’s some hinting around about infidelity that could be problematic.

You can stream You’ve Got Mail.

You can stream You’ve Got Mail on HBO Max, Amazon Prime, and, starting on May 1, Netflix. Imagine what Joe and Kathleen would think about all those options while they were waiting to write love letters on their dial-up modems.

More Like This
'Top Gun: Maverick' Is More Tween-Friendly Than The Original
20 Memorial Day Movies To Watch As A Family This Year
Kate Middleton Explains Why Her Kids Couldn't Attend The Top Gun: Maverick Premiere
Disney's Enchanted Sequel Follows Princess Giselle As A Suburban Mom On A Mission