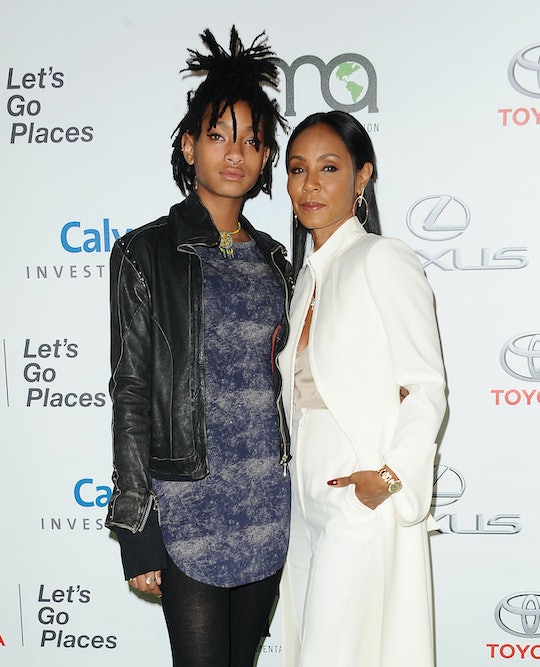 Like mother, like daughter. Or is it the way around? Jada Pinkett Smith has followed in the footsteps of her daughter and shaved her head. The 49-year-old actress and producer showed off her freshly shaved head on her Instagram, revealing that her daughter was the spark behind her new look.

“Willow made me do it,” Pinkett Smith wrote on Instagram on Monday, reposting a selfie of the both of them, “because it was time to let go BUT … my 50’s are bout to be Divinely lit with this shed.” The Matrix 4 star turns 50 on Sept. 18.

To show support for her mother, Willow posted the same selfie with the quote, “a gift is pure when it is given from the heart to the right person at the right time and at the right place, and when we expect nothing in return.”

In a 2018 episode of Red Table Talk — the Facebook talk show Pinkett Smith co-hosts with Willow and her mother, Adrienne Banfield-Jones — Pinkett Smith opened up about her struggles with alopecia, a condition that attacks the hair follicles and causes severe hair loss. “It was terrifying when it first started,” Pinkett Smith shared at the time. “I was in the shower one day and then just handfuls of hair just in my hands … It was one of those times in my life that I was literally shaking with fear.”

A few years ago, Pinkett Smith was her daughter’s biggest advocate when the “Whip It” teen decided to shave her head at 11 years old and later dyed it pink and green. In an October 2020 episode of Red Table Talk, she spoke about how she was mom-shamed by mothers for allowing her daughter to do that. “With Willow, I think the first time I got hardcore criticism [was] when you first cut your hair,” Pinkett Smith said. “There was a firestorm.”

But she later added, “If they could have seen this child's expression of freedom looking at her hair falling to the ground ... me as a mom, looking at that, experiencing that with her, there is nothing that anyone could say to me to tell me that it was wrong. Not one person, because I was there... I was looking at her. I saw her face. I knew the journey that she and I took together to get to that point. So it didn't really matter what anybody said.”

So like how mom had her back, her daughter surely has hers!