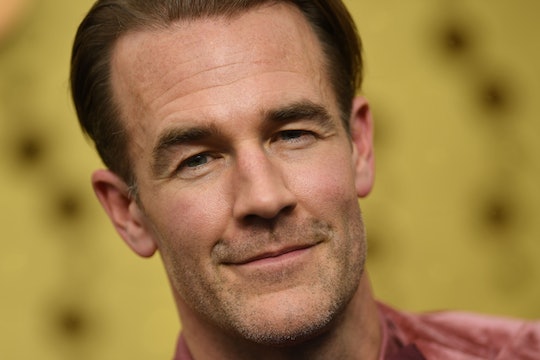 “If you think I’ll be removing this pink nail polish before pouring concrete with a few friends tomorrow… then you probably don’t have kids.”

With six kids, including the recent arrival of 5-month-old son Jeremiah, it’s admirable that actor James Van Der Beek has the time to exhale and get a manicure. In a recent Instagram post, the former Dawson’s Creek teen heartthrob shared a picture and video of his adorable 3-year-old daughter Gwendolyn polishing his nails the perfect shade of pink. As if his impressive gender-norm-busting post wasn’t enough, Van Der Beek also included some pretty remarkable insights on being a modern dad.

Just the image of Van Der Beek’s little girl in her satin eye mask, giving her famous father a manicure, sends a strong message. But the Varsity Blues star also complemented the picture with a soulful “parenting perk,” worthy of a budding dissertation on raising children.

“Parenting perk: Surprise liberation from limited belief systems. Way back when we were pregnant with our first, I was on a set where the director had nail polish on one hand - black. It looked kind of emo, and someone commented on it. He said - without an ounce of embarrassment - that his daughter had done it, and I recall wondering why he hadn’t taken it off before working with a crew of people who might judge him. Now I get it.”

Van Der Beek added that what he saw was “one of those things you can’t really convey to someone on the brink of having their first child: The complete ease with which you abandon sh*t you once thought mattered, (but probably never really did in the first place)… and the simple joy you find in things that baffled you before you became a parent.”

The proud dad ended his post on a beautiful note: “Which is to say… if you think I’ll be removing this pink nail polish before pouring concrete with a few friends tomorrow… then you probably don’t have kids #girldad.”

Van Der Beek also shared a video of the daddy-daughter bonding, where the sunburnt and baseball-capped celebrity was seen hanging out in the backyard with some friends, sipping wine and having snacks. As the super-blond toddler focused on her dad’s manicure with laser beam precision, Van Der Beek sweetly gave his little one a pep-talk: “You’re doing a great job, honey.”

The Dancing With the Stars alum is not just a proud #GirlDad, he’s a pretty awesome partner, too. Van Der Beek’s been very vocal and sensitive about his wife’s multiple miscarriages and late-pregnancy loss, sharing his family’s heartbreak as a way to shed light on this delicate but important topic.

Married to wife, Kimberly, for over 11 years, the couple shares 11-year-old Olivia, 9-year-old Joshua, 7-year-old Annabel, 5-year-old Emilia, 3-year-old Gwendolyn, and their new baby boy. With so many kids and so little time on his hands, at least Van Der Beek never has to leave his house to get his nails done.