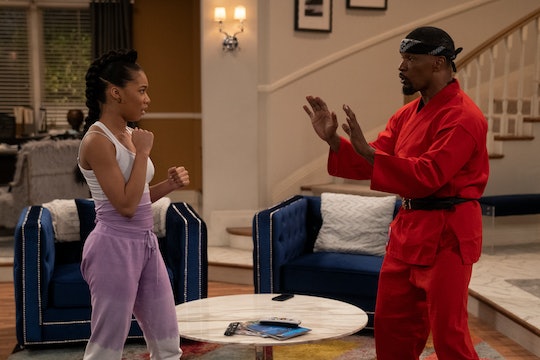 Although the Netflix sitcom is hilariously relatable, it will not be returning for Season 2.

After only one season, Jamie Foxx’s newest sitcom inspired by his time embarrassing his own daughter, in addition to other sweet and tender moments together, has been cut short. Netflix has decided to pull the plug on Foxx’s Dad Stop Embarrassing Me series. The first episode aired on April 14 on Netflix. Although it will not continue with Season 2, the show is full of dad jokes and worth a watch!

In the Netflix sitcom, Foxx plays a successful business owner and bachelor, Brian Dixon, who has to quickly transition to full-time dad mode to take care of his teenage daughter, Sasha, played by Nickelodeon actress, Kyla-Drew Simmons. With the help of his dad, played by former In Living Color co-star David Alan Grier, and his sister, portrayed by actress Porscha Coleman, he is going to need all the help he can get to conquer this fatherhood thing!

Why Was It Canceled?

According to Deadline, the decision to end the series was from Foxx. No reason was given as to why exactly the show was cancelled. But the Jamie Foxx Show star and Netflix reportedly have a “long-standing creative partnership.”

You Can Stream Dad Stop Embarrassing Me! Now

Dad Stop Embarrassing Me! premiered on Netflix on April 14. To celebrate the premiere, Foxx and his daughter Corrinne, who is an executive producer on the show, crashed a Zoom party where fathers and daughters were sharing their most embarrassing stories.

“I’m definitely happy to see I’m not the only one out here making a fool of myself,” 53-year-old Foxx says in the video, which was made in partnership with the organizations, GLOBAL Down Syndrome Foundation and Girl Up.

The Sitcom Is Based On Real Life

Foxx shared on Instagram that the show is based on his relationship with his own daughter, 27-year-old Corinne. “You guys will get a chance to witness some funny a** S#%T!!” Foxx wrote. “A sitcom based on myself and my daughter. Every parent and every kid is going to relate to this!!! So get ready to laugh and have some good family time.” Foxx shares Corinne with his ex-wife Connie Kline and also has an 11-year-old daughter, Annalise Bishop, with his ex-girlfriend, Kristin Grannis.

"It's a sitcom, and it's my dad's return to TV comedy,” Corrine told Entertainment Tonight in a December 2020 interview. “We've obviously done a lot of things in the public eye together but we also have this private life that people don't really know; they don't know all these embarrassing stories.” Corinne is also the star of the drama, Safety, which is available now on Disney+.

The title of the show also appears to be based on true events. During a 2019 interview with Yahoo! Entertainment, Corrine called her dad “a big kid” and shared a story about when he showed up at a high school game where she was cheerleading, wearing a shirt with her face on it. “There was a time when I was a cheerleader in high school,” Corinne told the news outlet. “It was like my senior game, and my dad shows up in the stands with my whole family, which was like 20 people, wearing shirts with my face on it.”

The Trailer Hints That Families Can Relate

From daughters and dads, it looks like everyone can expect a relatable moment in the upcoming series. In February, Corinne told The Grio that while the show is their “story,” it’ll likely remind viewers of those same kinds of embarrassing moments with their parents. “When you’re in the moment as a teenager and going through this stuff, it’s not funny, and you’re actually upset,” she said. “But it’s so fulfilling to see how these stories have grown into something that my dad and I can cherish and love. This is our story, and it’s just like, ‘Wow, at least we went through all that for something!’

Check out Dad, Stop Embarrassing Me on Netflix.

This article was originally published on March 26, 2021