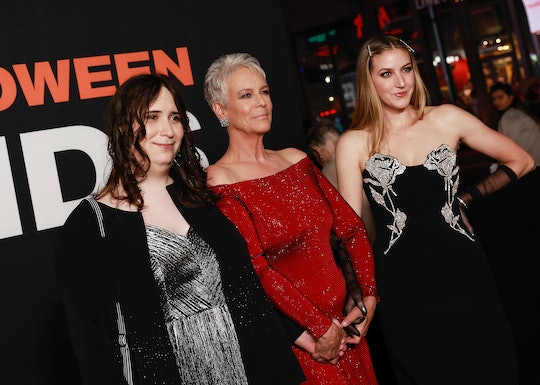 The three attended the premiere of Halloween Ends together.

When Jamie Lee Curtis arrived at the Halloween Ends premiere in Los Angeles on Tuesday, she had two reasons to be extremely proud. The end of a decades-long franchise playing the frequently terrorized Laurie Strode, a role that first catapulted her career back in the ‘70s. And a night shared with her two daughters, who joined her at the premiere in a show of support.

Curtis attended the premiere of the newest, and presumably final, installment of the Halloween franchise, Halloween Ends, on Tuesday alongside her two adult daughters Ruby and Annie, both of whom she shares with husband Christopher Guest. The actress told Fab TV that having her daughters with her at the premiere felt fitting, as she believed the theme of the Halloween movies are all about family.

“My family is here. I have a family. Laurie had a family. These movies are about families. Families have shared them from years and years,” Curtis told the outlet. “People who were teenagers are now showing their teenagers. It’s a beautiful linkage for me in every possible way.”

On Instagram, Curtis shared a photo of the three of them posing together on the red carpet with the caption, “My family. Proudest mother. Loving support.”

The family has had a big, exciting year full of reasons to celebrate beyond the premiere of a new movie. Her daughter Ruby was married this summer in full World of Warcraft cosplay, and it was especially poignant as the wedding was held in Curtis and Guest’s backyard. With Curtis herself acting as the officiant. “We're gonna have a beautiful picnic in the backyard. I'm really excited," Curtis told Jimmy Kimmel in March. “Both my children will have been married in my backyard, which brings me to tears.”

Curtis has also been vocally supportive of her transgender daughter, telling People in 2021, “I am here to support Ruby. That is my job, just as it is to care and love and support her older sister, Annie, in her journeys. I’m a grateful student. I’m learning so much from Ruby. The conversation is ongoing. But I want to know: How can I do this better?”

This family is really in each other’s corners in every way. Which is more than can be said for Michael Meyers and his family.